Twelfth Crime Congress to be held in Brazil in 2010 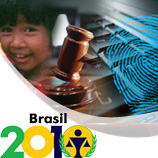 10 September 2009 - The Government of Brazil will host the Twelfth United Nations Congress on Crime Prevention and Criminal Justice in Salvador, from 12 to 19 April 2010. Pre-Congress consultations will take place on 11 April 2010.

The theme for the Twelfth Congress will be "Comprehensive strategies for global challenges: crime prevention and criminal justice systems and their development in a changing world".

Crime congresses have been held every five years since 1955 in different parts of the world and have contributed to shaping international and domestic policies and promoting novel thinking and approaches to complex issues at the heart of one of the key institutions of the modern state: the criminal justice system.

The Twelfth Crime Congress will bring together the largest and most diverse gathering of policymakers and practitioners in the area of crime prevention and criminal justice, as well as parliamentarians, individual experts from academia and representatives of civil society and the media.

The Twelfth Crime Congress, which marks the fifty-fifth anniversary of United Nations congresses on crime prevention and criminal justice, offers a unique opportunity to stimulate in-depth discussion and proposals for action along three principal avenues by:

The provisional agenda for the Twelfth Congress shows that special attention will be paid to: children, youth and crime; smuggling of migrants; trafficking in persons; money-laundering; and cybercrime.

As is the practice, participants in the Twelfth Congress will adopt a declaration containing recommendations based on deliberations held during the high-level segment, the round tables and the workshops, to be submitted to the Commission on Crime Prevention and Criminal Justice at its nineteenth session, in 2010.

Four regional preparatory meetings have been held (in Latin America and the Caribbean, West Asia, Asia and the Pacific and Africa), providing a platform from which to discuss the issues that will be raised at the Twelfth Congress from a regional perspective. At the regional preparatory meetings, participants highlighted special problems and concerns, as well as successful experiences and promising approaches to addressing them.