Ten stories the world should hear more about 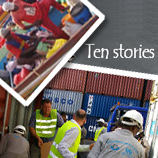 7 September 2009 - The United Nations Department of Public Information recently released its annual list of 10 stories the world should hear more about.

Operating in a densely-packed information environment where users have immediate access to the latest developments and news and use the latest information technologies, including new social media, the United Nations tries to make sure that stories that do not necessarily grab the headlines are not forgotten.

The stories seek to highlight issues that may not have made it to many people's radar screens - and are intended to stoke further inquiry and research.

Two of the 10 stories the world should hear more about were UNODC stories.

The first story looks at how cocaine trafficking in West Africa is fueling corruption in the region. In the past few years, West Africa has become a hub for the trafficking not only of cocaine from Latin America to Europe but also of other goods. West Africa suffers from a combination of factors, such as weak governance, that make it vulnerable to organized crime; criminals are exploiting those conditions to traffic products through the region.

The second story focuses on seaports and how they are now being monitored and used to crack down on trafficking in arms, drugs and human beings. About 420 million containers are shipped every year (90 per cent of all world trade), of which only 2 per cent are inspected. UNODC has partnered with the World Customs Organization to assist Governments by providing training and equipment at selected seaports to minimize the risk of maritime containers being used for drug and human trafficking, transnational organized crime and other forms of black market activity.

For more information, check the links to the stories published on the UNODC website:

Panama gets on board to boost port security

Please contact us if you are interested in covering the stories further and require more details on the overall project or would like to arrange an interview or obtain additional photos or B-roll footage.

Ten stories the world should hear more about

Transnational Trafficking and the Rule of Law in West Africa: a Threat Assessment (pdf)