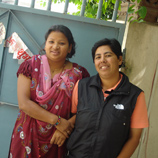 23 April 2010 - At the age of 13, Astha* was taken to a carpet factory in Kathmandu to work. "I was not aware that I had been sold to the owner," says Astha. "They made me work hard weaving carpets, and at night the owner would call me aside and sexually abuse me. I worked there for eight years and saw girls who were forced by the owner to sell their kidneys."

Astha is one of the thousands of young Nepalese women and girls who have been trafficked into a life of forced labour, sexual exploitation and constant fear. The girls are trafficked each year and are usually sent to India, Malaysia, Saudi Arabia and other Gulf States for sexual exploitation. Most come from rural areas. Many traffickers, who are often part of well-organized networks, entrap their victims and deceive their guardians by offering the girls marriage and a better life. Instead, the girls end up enslaved. According to Astha, girls who are sold to brothels can earn their captors as much as $250,000 during their "careers" as sex workers.

Astha was one of the fortunate few who escaped this brutal and degrading life. One day, an outreach worker from an NGO called Shakti Samuha came to the factory where she worked and talked about trafficking and the kind of help that was available. Astha sought the organization's aid and got away.

Today, Astha works for Shakti Samuha as warden of its shelter for trafficked women in Kathmandu. Shakti Samuha was founded by Nepalese women who were themselves trafficking victims and therefore understand what kinds of support and resources are needed most by the women whom the organization serves. UNODC and its partners have provided support to the Shakti Samuha shelter through a regional anti-trafficking project.  The organization provides victims with food and shelter, counselling, vocational training - and acceptance.

Most Nepalese women and girls who have been trafficked cannot return to their homes for fear of discrimination and abandonment. Indeed, family members are often complicit in trafficking in Nepal, so they are unlikely to welcome their daughters back. Shakti Samuha gives young women who have been trafficked a new chance at life, helping them to gradually reintegrate into society and regain their dignity and self-respect. It also offers self-defence training against violence and classes in HIV prevention.

Shakti Samuha reaches out to young girls across Nepal, raising awareness about trafficking for sexual exploitation. It works with the Government of Nepal to help set up district-level anti-trafficking units that disseminate information. Shakti Samuha outreach workers also help women who may be sexually exploited in dance bars and factories.

Every year, thousands of men, women and children fall victim to traffickers in their home countries and abroad. Through coercion, deceit or force, they are exploited for labour, sex or even their organs. Almost every country in the world is affected by this crime against humanity, whether as a country of origin, transit or destination for victims.

UNODC is working to help States prevent human trafficking, protect its victims and prosecute its perpetrators in line with the United Nations Protocol to Prevent, Suppress and Punish Trafficking in Persons. As of March 2010, 137 States are party to the Protocol.

UNODC helps countries draft laws and create comprehensive anti-trafficking strategies and assists with the resources needed to implement them. UNODC offers specialized assistance, including the development of local capacity and expertise, and practical tools to encourage cross-border cooperation in investigations and prosecutions. UNODC also rallies international opposition to human trafficking among the private sector, civil society, the media and the general public through the Global Initiative to Fight Human Trafficking ( UN.GIFT) and the Blue Heart Campaign.

*Not her real name.