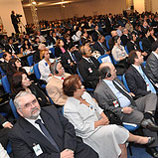 19 April 2010 - The Twelfth United Nations Congress on Crime Prevention and Criminal Justice has wrapped up in Salvador, Brazil, with the adoption of a declaration that calls on Member States to adapt their criminal justice systems to a changing world. The Congress, which is held every five years, took place from 12 to 19 April. Representatives of more than 100 countries and of international, regional and non-governmental organizations took part in the Congress. In addition to political meetings and drafting sessions, numerous ancillary meetings on a wide range of issues relating to criminal justice were held.

"The legacy of Salvador is that unless there is international justice cooperation, the world will not succeed in providing more security and justice for the people", said Mr. Romeu Tuma Jr., National Secretary of Justice of Brazil. "I hope that from Salvador we can effectively turn words into actions."

In the Salvador Declaration, Member States underlined the need to respect and protect human rights in preventing crime and administering criminal justice. "As human beings, as well as members of the community of civilized nations, we have a shared responsibility to place human rights at the heart of the justice system", said UNODC Executive Director Antonio Maria Costa.

The Congress looked at the impact of crime on the safety and well-being of societies. "There can be no security, no development without justice", said Mr. Costa. "Crime prevention and criminal justice are not ends in themselves: they create safer and richer societies", he said.

Member States declared that they were "greatly concerned by the negative impact of organized crime on human rights, the rule of law, security and development, as well as by the sophistication, diversity and transnational aspects of organized crime and its links with other criminal and, in some cases, terrorist activities."

"Organized crime has become a business with macroeconomic dimensions, comparable to the national income of many countries and the turnover of the world's largest corporations", warned Mr. Costa.

Bearing in mind the transnational nature of organized crime, Member States called for greater international cooperation, such as mutual legal assistance and information exchange, to disrupt illicit activity and bring criminals to justice. They stressed the need to make more effective use of the United Nations Convention against Transnational Organized Crime, which was adopted in Palermo a decade ago. A conference of parties to the Palermo Convention will meet in October in Vienna. "I urge Member States to agree on an implementation review mechanism in order to measure progress and identify needs for assistance", said Mr. Costa.

One of the main themes of the Congress - echoed in the Salvador Declaration - was that Member States must adapt their criminal justice systems to changing times. For example, the Member States called for a review of United Nations standards and norms relating to crime prevention and criminal justice with a view to updating and supplementing those standards and norms if necessary. They focused on the use of new technologies to fight crimes such as cybercrime, money-laundering and trafficking in persons and also looked at ways of fighting new forms of crime, such as environment-related crime, identity-related crime, piracy of digital material and cybercrime. "These threats are hard to capture: they travel as bytes, disguised as licit transactions, sourced in hard-to-define jurisdictions - yet their complexity must not be a deterrent", said Mr. Costa.

In an important breakthrough, Member States agreed to explore ways of universal regulation to counter cybercrime. "This could open the way for a new cybercrime convention", said Mr. Costa.

The Congress devoted a great deal of attention to vulnerable groups, such as children and youth, women, migrants and drug addicts.

Prisons and the rights of prisoners were also a high-profile issue. The Salvador Declaration calls on Member States to improve prison conditions and the treatment of prisoners, seek alternatives to imprisonment and reduce the number of prisoners in pretrial detention.

Since money is a major motive for criminals, Member States looked at ways of increasing the risks and lowering the benefits of crime. The Salvador Declaration calls on States to implement the United Nations Convention against Corruption, crack down on money-laundering and the financing of terrorism and strengthen measures to seize, confiscate and recover the proceeds of crime.

Member States stressed the need for greater technical assistance in delivering justice, and praised the experience and expertise of UNODC. Brazil announced that, in compliance with article 30 of the Palermo Convention and article 62 of the United Nations Convention against Corruption, it would use confiscated proceeds of money-laundering and other crimes to finance the implementation of those instruments and to support criminal justice reform in developing countries through UNODC, and invited others to follow its example.

Knowledge is essential for evidence-based policy. "Unlike in other domains where the United Nations is the world's best information provider, we don't have the definitions, data and logical framework to report on crime trends, understand its causes and measure its size", said Mr. Costa. In the Salvador Declaration, Member States are invited to strengthen the capacity of UNODC "to collect, analyse and disseminate accurate, reliable and comparable data on world crime and victimization trends". Member States are also encouraged to strengthen their national data collection capacity.

While the main focus of the Congress was on the role of States, the point was also stressed that crime prevention and criminal justice cannot be achieved by Governments alone, but rather must involve all stakeholders, including the private sector, civil society, the media, educational institutions and the public at large. "The law will not rule unless we launch massive efforts to engage common people and make society at large willing to promote the culture of justice", said Mr. Costa.

Member States welcomed the offer of the Government of Qatar to host the next (thirteenth) United Nations Congress on Crime Prevention and Criminal Justice in 2015.

The next major United Nations meeting on crime will be the nineteenth session of the Commission on Crime Prevention and Criminal Justice, to be held in Vienna from 17 to 21 May 2010. The main theme of the session will be how to prevent trafficking in cultural property.

Information for the media