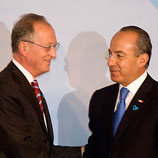 14 April 2010 - Mexico today took the lead in putting human trafficking on the global agenda by launching its own national version of the United Nations "Blue Heart" campaign against human trafficking.

President Calderón said, "It is an honour for Mexicans to be the first country on the American continent and in the world to join and launch from here this important prevention campaign, and to raise awareness about this crime of human trafficking. We have to act now in raising awareness in the whole of society, we have to act now with the determination to put an end to inhuman practices which turn people into merchandise, because human beings are not and cannot be for sale."

[Photo Slideshow of the Blue Heart Campaign Launch in Mexico]

Traffickers seek out vulnerable victims and coerce them into situations of exploitation. One such example is Maria (not her real name), an 8-year old girl who was forcibly removed from her home in Guatemala by a child trafficking ring and taken to a brothel in Cancún two years ago. Maria is now staying in a shelter for victims of human trafficking in Mexico City.

The Mexican "Blue Heart" campaign, developed in partnership with UNODC, calls on all sectors of Mexican society to help mobilize social conscience against what is a crime against human dignity. As part of the campaign launch, over a dozen emblematic buildings were lit up in blue across Mexico City in a symbolic act to raise awareness about the Blue Heart campaign.

The "Blue Heart" campaign aims to raise awareness of human trafficking as a modern form of slavery that exploits millions of people around the world and to prevent more people from becoming victims. "I admire Mexico's leadership in fighting this modern slavery, as demonstrated through its strong commitment to the Blue Heart campaign," said Mr. Costa.

In June, Spain will become the next country to join this growing global awareness campaign, under its Presidency of the European Union.

"Much more must be done to prevent people from falling into the claws of these human predators, to bring these vultures to justice and to protect the survivors," said Mr. Costa. "This is not just the responsibility of governments. Human trafficking is a crime that shames us all. Since almost everything we consume has been stained by the blood, sweat and tears of trafficking victims, we have a shared responsibility to act - that is why we are calling on people to join the Blue Heart campaign.

"I applaud the leadership of the Government of Mexico in this campaign, and the way that Mexico's people, media and civil society have opened their hearts. Mexico's determination to end human trafficking is an example to be followed by other countries around the world."

The "Blue Heart" Mexico campaign has developed a pact with the heart, a list of ten self-promises that will act as guiding principles for all those who join the campaign.