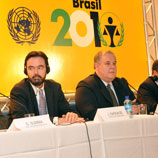 12 April 2010 - The Twelfth United Nations Congress on Crime Prevention and Criminal Justice opened in Salvador, Brazil, with a fervent call by United Nations and government officials for greater global cooperation among all stakeholders and more effective legal tools to stamp out organized crime.

John Sandage, Executive Secretary of the Congress and Officer-in-Charge of the UNODC Division for Treaty Affairs, noting that organized crime posed a greater threat to international peace and security than ever before, said in a statement delivered on behalf of United Nations Secretary-General Ban Ki-moon that such crime was a major obstacle to achieving the Millennium Development Goals and that it also inflicted grave harm on vulnerable groups - such as women, children and migrants - and vulnerable countries and societies grappling with weak governance, underdevelopment and conflict.

[Slideshow of the Opening of the Twelfth Crime Congress in Brazil]

"Sharpening our legal weapons is a must," he emphasized.  "We are all affected by crime; therefore, we have a shared responsibility to act."  A decade after the adoption of the United Nations Convention against Transnational Organized Crime, and amid growing concern about the dark side of globalization, the world was looking to the Congress to provide a better understanding of the state of crime and to strengthen the criminal justice response.

"I also urge you to strengthen bilateral, regional and international cooperation. This must be more than an intergovernmental process," he stressed. Calling on all stakeholders to get involved, he urged everyone to be more innovative so as to be one step ahead of such emerging threats as cybercrime, environmental crime and counterfeiting and to be more effective in stopping the flow of funds arising from corruption and money-laundering.

Mr. Sandage also delivered a statement on behalf of UNODC Executive Director Antonio Maria Costa in which he highlighted that the Congress was part of a busy calendar of events in 2010 that provided an unprecedented opportunity to strengthen crime prevention and criminal justice.  The Congress would enable participants to focus on making the criminal justice response "fit for purpose", take stock of the world crime situation and assess global preparedness to deal with organized crime, particularly emerging threats.  "Frankly, at the moment, the picture is rather blurry due to a shortage of information and analysis," he said.  UNODC is trying to sharpen the focus by preparing a threat assessment of transnational organized crime.

The Congress elected Luiz Paulo Teles Barreto, Minister of Justice of Brazil, as President of the Congress.  Mr. Paulo said that the theme for the Congress, "Comprehensive strategies for global challenges: crime prevention and criminal justice systems and their development in a changing world", reflected the growing importance of international cooperation in tackling the increasingly transnational character of organized crime and the complexity of the instruments and actions necessary to combat such crime in today's world.

Eight items on the week-long Congress agenda will be discussed in the plenary and the two committees: children, youth and crime; terrorism; crime prevention; smuggling of migrants and trafficking in persons; money-laundering; cybercrime; international cooperation in fighting crime; and violence against migrants and their families.

In addition to the eight items above, the Congress will focus on the role of the criminal justice system as a key pillar of the rule of law architecture and the need for safe and just societies as a prerequisite for development and attainment of the United Nations Millennium Development Goals.

The political declaration adopted by the Congress will be submitted to the United Nations Commission on Crime Prevention and Criminal Justice at its nineteenth session in Vienna in May 2010.

More than 70 meetings organized by non-governmental organizations on various issues relating to crime prevention, criminal justice and the rule of law will also be held.

The United Nations crime congresses have been held every five years since 1955 in different parts of the world and have contributed to shaping international and domestic policies and promoting innovative thinking and approaches to complex issues at the heart of one of the key institutions of the modern State: the criminal justice system.

Information for the media