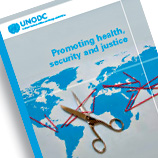 8 April 2010 -   UNODC today issued its 2010 Annual Report. "This Report shows how health, security and justice are the antidotes to drugs, crime and terrorism" said UNODC Executive Director Antonio Maria Costa. Secretary-General Ban Ki-moon, during an official visit  to Austria, said: "The UNODC 2010 Report showcases the extraordinary task accomplished by this small office. This is further proof of how Vienna has become a hub for human security issues, and how the United Nations can deliver assistance in the field to save people from the misery of drugs and crime."

The Report covers the full range of UNODC's work around the world: promoting drug treatment and alternative development; improving criminal justice; strengthening integrity; and reducing vulnerability to crime. Its descriptive chapters are brought to life by photos and personal accounts, like those of a trafficking survivor, a prison employee, a cacao farmer, and a recovering drug addict.

The Report also explains how UNODC carries out its renowned research, including its growing capacity in scientific and forensic services. The Report concludes by offering a blunt assessment of UNODC's resource requirements: "currently, resources available are minute compared to the gigantic menace that we face", said Mr. Costa.

One of the main themes throughout the Report is the threat posed by organized crime. The issue is high on the international agenda. Organized crime has been debated in the Security Council several times over the past six months, it will be the focus of the Twelfth United Nations Congress on Crime Prevention and Criminal Justice that will take place in Salvador, Brazil next week (12-19 April), as well as the fifth session of the Conference of the Parties to the United Nations (Palermo) Convention against Transnational Organized Crime to be held in Vienna this October. "2010 - which is the 10th anniversary of the Palermo Convention - should be the year for strengthening the international response to organized crime", said Mr. Costa.

"There is plenty of bad news about drugs and crime. This Report shows that these threats can be addressed in a way that has wider benefits for society, namely improving health, security and justice for all", said Mr. Costa.

If you would like to receive a print copy of the report please write to: info@unodc.org