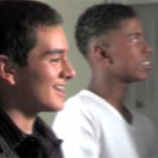 17 August 2010 - Colombia has long been recognized a drug-producing country and major supplier of drugs to the international markets. Local consumption of drugs has mostly been overlooked, but new data shows that more and more people in Colombia are now consuming some kind of illicit drug. Authorities have become concerned about the increase in the consumption of heavy drugs such as heroin and cocaine.

According to the last National Study on Drugs, released in 2008 by the Colombian Ministry of Social Protection, the National Narcotics Directorate and UNODC Colombia, 540, 000 people between the ages of 12 and 65 were found to have used some kind of illicit drug in the preceding year.

The Colombian Government, working together with UNODC, is determined to make the country a "drug-free territory". Recently, the Government launched a new public awareness campaign in the capital, Bogotá, called "Colombia, a drug free territory". The campaign, in the form of television, radio and online infomercials, is being carried out in major cities in the country.

The main objective of this awareness campaign, which was officially launched by the immediate former President Álvaro Uribe Vélez, is to transform the social and cultural representation of lifestyles that promote the use of drugs. The campaign promotes prevention strategies through education and information, and is aimed at highly vulnerable groups by promoting healthy choices. It calls on people to make healthy and drug-free choices in different contexts of life such as at school, at home, with family and in the neighborhood. 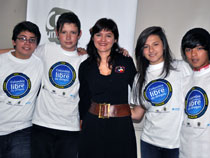 So far, hundreds of members of the public including youth, students and government officials have signed up to the campaign by putting their signatures on a map of the country that declares Colombia a drug-free territory.

The Representative of UNODC in Colombia, Aldo Lale-Demoz, recognizes the efforts of the Colombian Government in its fight against the use of drugs. "We congratulate the Government for conducting the National Study on Drugs, which had not been carried out in the last 10 years. We also congratulate them for the actions taken once the results of the report were made known. Instead of covering up the numbers, they took public policy actions to mitigate the problem, one of them being this campaign," said Mr. Lale-Demoz during the launching of the campaign.

"Up until a few years ago, various regions of the country where recognized as producers and exit doors of great quantities of drugs which supply the international markets. Now, thanks to control measures enforced by the military and the police, exportations roads have partly closed down, and the amount of drug previously available for external consumption now supplies a home market and fuels national consumption, made easily available to young people", says Maria Mercedes Dueñas, the campaign manager.

Watch the video "Colombia, a drug-free territory" (in Spanish)