When cheap fakes mean paying too high a price 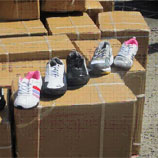 26 August 2010 - Counterfeiters know how to exploit people's appetites for global brands, making knock-offs for a fraction of the price. But even everyday items are subject to fraudulent imitations. According to the recent report of UNODC The Globalization of Crime: A Transnational Organized Crime Threat Assessment, counterfeit products destined for 140 countries were intercepted in 2008. This type of organized crime not only cheats consumers but also threatens national economies. It also endangers the lives of individuals who purchase spurious or substandard medicines and household goods.

Counterfeit goods from Asia to Europe

Outsourcing, a major driver of the global economy, can allow counterfeiters to escape regulation since the designers and manufacturers of goods often live continents apart and production is decentralized. The lines between legitimate and illicit production can become blurred.

Counterfeit goods are turning up at European borders and most of this seaborne merchandise comes from the Far East. Some of it is sold through discount stores, but informal channels, such as flea markets and street retailing, take a big share.

In some cases, illegal migrants, indentured to those who smuggled them into the country, have been forced to become counterfeit vendors. Based on European seizures and consumer surveys, the annual value of this market is around US$ 8.2 billion.

Counterfeit medicines from Asia to South-East Asia and Africa

Asia, a key manufacturer of medicine, is witnessing the production of counterfeit drugs. Many of the pharmaceuticals tested in both South-East Asia and Africa are fake. Besides harming the user, impure medications can create drug-resistant strains of pathogens, a potential global threat.

Africa has become fair game for counterfeiters - often with lethal results. Consumers in some of the poorest parts of the world are victims of bad medicines, even if profits are relatively meagre. "This is an opportunistic crime, emerging where regulatory capacity is low, not where profits would be highest," explained Mr. Leggett. Although these consumers spend less than US$ 10 per capita per annum on medicines, if even one tenth of that expenditure was wasted on counterfeits, it would amount to some US$ 1.6 billion per year.

Fighting back with international cooperation

UNODC is the guardian of the United Nations Convention against Transnational Organized Crime, the main international instrument to counter organized crime, such as counterfeiting, and spur coordinated international cooperation.

The Conference of the Parties to the Convention will hold its fifth session in Vienna in October 2010 to improve the capacity of States parties to combat transnational organized crime and to promote the implementation of this Convention.