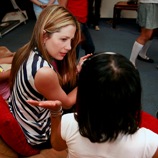 15 December 2010 - Academy Award winning actress, humanitarian and UNODC Goodwill Ambassador Mira Sorvino was today awarded the Global Advocate of the Year Award for her support in highlighting the plight of victims of human trafficking by the United Nations Correspondents Association (UNCA), the UN's press corps in New York.

Presented by the Secretary-General, the Award recognizes Ms. Sorvino's work in raising awareness about this crime which has become one of today's top concerns, affecting the lives of millions across the world.

Speaking at the event ceremony, UNODC Executive Director Yury Fedotov praised Ms. Sorvino's work in fighting this crime which traps over 2.4 million people globally: "Human trafficking is a complex problem, and the challenges remain daunting. But all over the world, momentum is growing to stop this shameful violation of human rights and human dignity. Mira Sorvino has made an enormous contribution to this momentum. Her work onscreen and off has lent a voice to the voiceless."

In addition to her Academy Award for her performance in the film Mighty Aphrodite, Ms. Sorvino received a Golden Globe nomination for her powerful performance in the landmark miniseries Human Trafficking. The show, which focuses on the plight of three girls who are trafficked for sexual purposes, highlights what so many have to endure day after day.

"Both with UNODC and on her own, Mira has met with countless victims of trafficking, and she uses her platform as a global personality to tell their powerful stories. We are grateful for Mira's extraordinary commitment and her invaluable assistance to UNODC in our efforts to fight human trafficking", said Mr. Fedotov.

Ms. Sorvino's involvement in raising awareness around trafficking has been extensive and she has been the face of UNODC's Blue Heart campaign to end human trafficking at the two recent Spain and Mexico launches.

Earlier this year she actively participated in intense consultations with Member States during the negotiations of the newly adopted United Nations Global Plan of Action to Combat Human Trafficking. One of the outcomes of the Global Plan of Action is the formation of the United Nations Voluntary Trust Fund for Victims of Trafficking, giving Governments, the private sector, international organizations, NGOs and individuals the means to partner with each other to directly and meaningfully help trafficking victims.

Ms. Sorvino also attended the recent Luxor International Forum against Human Trafficking, participated with the Secretary-General in the 2010 Global Creative Forum in Los Angeles where she raised awareness of the need to prioritize efforts to fight trafficking, was on the jury of this year's CNN Heroes Awards and has represented UNODC at the Clinton Global Initiative, as well as given testimony to the US Congress on trafficking in persons. She has also been honoured with Amnesty International's Artist of Conscience Award.