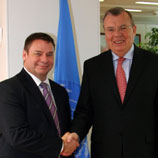 "To tackle drugs, we need to keep constant contact with on the ground knowledge and expertise. Our main partner NGOs provide that context and support our work from the local to the global level", said Mr. Fedotov.

The new chair, Mr. Perron, is the Chief Executive Officer of the Canadian Centre on Substance Abuse a lead NGO in drug prevention and treatment. From 2007 to 2009, he led the " Beyond 2008", a global initiative undertaken in partnership with UNODC  that  engaged over 900 NGOs from 145 countries to review the United Nations General Assembly Special Session on Drugs.

The Vienna NGO Committee on Drugs (VNGOC) is one of the main NGO partners that UNODC collaborates with, and has members from major international, national and local NGOs around the globe. It represents some 10 million affiliated individuals working on drug related issues and provides a vital and unique bridge between NGOs, the work of Commission on Narcotic Drugs (CND) and UNODC.

This initiative succeeded in reaching consensus among a wide range of civil society organizations with  diverse ideological background for a set of recommendations which were brought to the high level Segment of the Commission on Narcotic Drugs.

Below are excerpts of an interview with Mr. Perron on his appointment:

UNODC: What will be your mandate as the new chair of the Vienna NGO Committee on Drugs?

Mr. Perron: The VNGOC has a long and rich history of serving as a bridge between NGOs UNODC and the Commission on Narcotic Drugs (CND).  My role along with that of the VNGOC Board will be to ensure that we continue to serve those NGOs while building on our successful relationship with the UNODC Civil society team. My practical objectives are to lead a process of modernizing our constitution, addressing regional representation on the committee, stabilizing our operating budget and resources while strengthening the platform through which we can increase communications and support to all our members.

UNODC: What are the opportunities for NGOs engagement with UNODC?

Mr. Perron: The Commission on Narcotic Drugs is the most visible gathering and opportunity for NGO's to work with UNODC - and it remains an important priority for the VNGOC whether through our role in facilitating informal dialogues with UNDOC senior staff, hosting joint policy forums or advancing the consensus recommendations we  established through the Beyond 2008 process. VNGOC also remains a strong supporter of the UNODC Civil Society team as it is the primary link between our members and the many important components of UNODC.

Equally important to the CND, is the VNGOC's opportunity to work with the Civil Society team to enhance relations between and among NGOs from all regions of the world with their respective UNODC regional representatives. This is critically important work to ensure continuity of relations between local governments, NGOs and UNODC regional offices in order to advance Beyond 2008 recommendations among other common priorities.

UNODC: Drug use and drug dependence continues to be an emerging threat to Eastern Europe, parts of Asia and Latin America, coupled with increasing new HIV infections for injecting drug users, according to new reports. What can NGOs do to address this?

Mr. Perron: NGOs have clearly demonstrated their meaningful understanding and expertise of these issues through their existing work in the field, in advising and working with national governments and advancing the need for those most affected to receive the services and supports they deserve. Many of the specific opportunities for collaboration with NGOs on these matters were articulated as part of the Beyond 2008 declaration and resolutions which continue to serve as a specific roadmap for governments, the INCB and UNODC to work with NGOs on these intractable challenges.

UNODC: Human rights are increasingly becoming central to the approach in the fight against drugs and drug dependence. What are your views on this?

Mr. Perron: This is an issue of central importance to NGOs as they are often among the first to witness the impact of policies and actions that infringe on human rights particularly among those affected by drug policy. We also spoke specifically on this issue in the Beyond 2008 declaration and resolutions - both in identifying this matter as core to drug policy actions along with practical and pragmatic recommendations that can be implemented by national government to ensure human rights are protected. I am of the view that highlighting human rights helps position drug policy debates through a specific lens and one which can help depolarize extreme policies and actions in place around the world.

What are the challenges of communicating messages on the dangers of drugs on the ground and how are NGOs addressing this?

Mr. Perron: NGOs represent a rich and diverse array of experts dealing with all facets of the drug problem and its impact on people across the globe - and this includes active work in the area of drug prevention and education. This is central to the work of many NGO's many of whom have highly creative and successful actions in sharing evidenced based information and strategies to prevent drug abuse. Our role as VNGOC is to celebrate and highlight this work in order that it may be applied by others. VNGOC will also continue to signal very clearly to governments, UNODC and the INCB that preventing drug abuse is a central priority for many NGOs and must remain so within the work of the CND and other related fora.

UNODC: At the fifty-second session of the Commission on Narcotic Drugs in Vienna in 2009, heads of States adopted the Political Declaration and Plan of Action on International Cooperation towards an Integrated and Balanced Strategy to Counter the World Drug Problem. What do you see as NGOs opportunities to put this plan in action?

Mr. Perron: The Declaration and Plan of Action represents a specific and important opportunity for NGOs across the globe to engage with the national governments and to forge strong partnerships to address key priorities. Further, NGOs and governments alike can benefit from the Beyond 2008 Declaration and Resolutions which represent the first ever global consensus among NGOs on the what and how to address drug policy and program issues. The Beyond 2008 resolutions were clearly a point of departure rather than the destination of a process of engagement which saw over 900 NGOs of all perspectives come together and agree on what needs to be done to address drug abuse.

The VNGOC and its members are committed to advancing the awareness and uptake of the Beyond 2008 recommendations at a national, regional and global level. We see these as entirely complementary to the Declaration and Plan of Action and they represent tangible, specific and practical areas of engagement with NGO's. We wish for all to benefit from this unprecedented opportunity for collaboration.