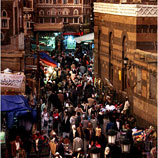 6 December 2010 - Yemen is one of the poorest and least developed countries in the Arab world, and faces many growth challenges similar to other developing nations, such as a struggling economy and internal strife. In recent times, Yemen has also increasingly come under a threat from terrorists.

To address these developmental and security issues, the Government of Yemen drew up a National Development Plan 2011-2015 as well as a National Reform Agenda, focusing on ways to address corruption, justice reform, terrorism and border control. UNODC used these tools as a backbone to develop a five-year Integrated Country Programme for 2011-2015, in close cooperation with the Government of Yemen.

The country programme, launched last week, takes a criminal justice response to tackling the two predominant threats to Yemen's security, stability and development, as identified by the Government, namely illicit trafficking (particularly of drugs); and criminal networks (including terrorism and its financing).

"There can be no lasting social and economic development without security, rule of law and health, and we are looking forward to working closely with UNODC to make sure that drugs and crime, in particular transnational organized crime, do not grow deep roots in Yemen", said a Government of Yemen representative at a meeting in the capital Sana'a that reviewed, finalized and endorsed the Country Programme.

The Country Programme also complements the efforts of "Friends of Yemen", a group that consists of governments aiming to assist and cooperate with Yemen in the areas of economy, development, governments and the rule of law.

The Country Programme intends to strike a balance between addressing Yemen's immediate challenges and supporting long-term development objectives, for example, through building legislative and regulatory frameworks in line with international conventions, standards and norms;  capacity building of the criminal justice and law enforcement structures; as well as strengthening regional and international cooperation.

The Country Programme for the Republic of Yemen 2011-2015 comes as a direct response to a unanimous request by Arab Member States, including Yemen itself, when they met in April and endorsed the UNODC Regional Programme on Drug Control, Crime Prevention and Criminal Justice Reform for the Arab States 2010-2015.