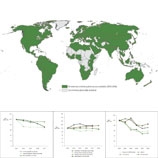 16 February 2010 - A new UNODC statistical report shows stable or decreasing global homicide trends over the period 2003-2008 for the majority of countries for which data is available in the Americas, Asia, Europe and Oceania.

Exceptions to the trend include a number of Caribbean and Central/South American countries, including Belize, Guatemala, Honduras, Jamaica and Venezuela, which show significant increases in homicide rates. Research suggests that this may be due, in part, to increases in transnational organized crime, drug trafficking and gang activity. In addition, a slight increase between 2007-2008 was seen in a few countries in Europe demonstrating a need for continued vigilance and effective crime prevention action. Unfortunately, data for a number of countries in Africa and parts of Asia is not robust enough to provide a clear picture in the respective regions for useful analysis. ( Map)

Intentional homicide (the intentional killing of one person by another) is one of the most serious forms of crime and a key indicator of violent crime levels in a given country or region. Statistics on killings may be drawn from both health sources and criminal justice sources. As the majority of violent killings involve the use of some form of weapon, statistics on intentional homicide not only provide information on levels of non-conflict violent deaths, but can also provide information on overall levels of armed violence.

While a set of global homicide statistics have previously been published by UNODC for a single point in time (the year 2004), comprehensive trend data on international homicide has never been available. In a first attempt to overcome this gap, UNODC recently published new trend data (2003-2008 time series) for 88 countries and territories. This is the first time that criminal justice information has been available with such wide geographic coverage. 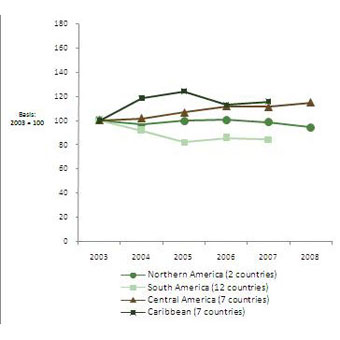 Criminal justice data on homicide are collected at the national level from law enforcement institutions, prosecutor offices, and ministries of interior and justice. These are reported at the international level through cross-national crime statistics initiatives such as the United Nations Survey of Crime Trends and Operations of Criminal Justice Systems (UN-CTS) and Interpol, the Statistical Office of the European Communities (Eurostat) and regional crime prevention and violence observatories. It may occur that, due to differences in counting methods and time of data collection, multiple criminal justice sources for the same country do not always produce identical figures.

The number of homicides per 100,000 population has been calculated by UNODC drawing upon both international and national sources. In line with its mandate to work with national criminal justice systems, UNODC focuses on criminal justice data supported, where relevant, by public health data.  It should be noted that, while there is good agreement between these two sources from countries in much of the world, data on violent deaths from public health and police or criminal justice institutions measure subtly different phenomena and are unlikely to provide identical numbers.

UNODC strives to provide enhanced knowledge of thematic and cross-sectoral trends for effective policy formulation, operational response and impact assessment in drugs and crime. The homicide trends statistics released by UNODC will prove invaluable to governments, crime prevention practitioners and researchers interested in analysing changes over time in homicide rates at national, regional and global levels. Updates to the dataset will be provided on an ongoing basis as further information becomes available.

Queries concerning the dataset may be addressed to sass.crime@unodc.org.