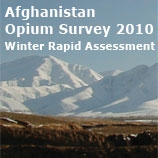 10 February 2010 - In a report issued today, UNODC projects stable cultivation of opium poppy in Afghanistan this year (measured in hectares), with a possible decrease in production (number of tons). "There is a good chance that Afghanistan will produce less opium this year," said UNODC Executive Director Antonio Maria Costa. Afghan opium is the raw material for the world's deadliest drug - heroin - and a major source of revenue for anti-government forces in Afghanistan and neighbouring countries.

The UNODC Winter Rapid Assessment is based on farmers' intentions at the time of planting. While most of the poppies are still under the ground, this assessment of the situation gives a first indication of what Afghanistan's opium poppy harvest will look like in 2010.

Opium poppy cultivation in Afghanistan has decreased by one third (36 per cent) over the past two years, from a record high of 193,000 ha in 2007 to 123,000 ha in 2009. Stabilization of the crop in 2010 is likely; if eventually confirmed, it would reinforce the progress made in the recent past.

Most importantly in 2010 production may decrease. Recently, Afghan farmers have enjoyed bumper yields from their opium bulbs: 56 kg/ha in 2009, compared to around 10 kg/ha in the Golden Triangle. Bad weather during the current growing season may reduce the productivity of the crop this year and thus volume (tons) of opium produced in the country. This would continue the decline that has seen production fall from a massive 8,200 tons in 2007 to 6,900 tons last year.

The number of poppy-free provinces is projected to remain stable or, perhaps, rise. Of the 20 Afghan provinces that were poppy-free in 2009, 17 are expected to remain so this year. Three provinces (Bahglan, Faryab and Saripul, all in the north) show signs of losing that status, due to a small increase in cultivation in districts with higher insecurity. Conversely, five provinces (Kunar, Nangarhar, Kabul, Laghman and Badakshan) where poppy was grown last year may attain poppy-free status in 2010.

"I urge the Afghan government and the international community to focus special attention on the eight provinces where opium cultivation is negligible, though not poppy-free", said Mr. Costa. "With appropriate local community-inspired measures - such as shura-driven campaigns, governor-led eradication and development assistance - three quarters of the country (25 out of 34 provinces) could become poppy-free in the near future," said Mr. Costa.

Since 2007, market forces have played a major role in influencing farmers' decisions against opium cultivation. This is still a factor: in the south-west of the country, where most of the opium poppy is grown, a quarter of farmers cited low prices and low yields as the main reasons for not growing opium poppy this year. However, price trends are starting to reverse. The price of licit crops, like wheat (down 43 per cent) is falling faster than the price of opium (down 6 per cent). "Development assistance is badly needed to help Afghan farmers find income alternatives to opium," said Mr. Costa.

Mr. Costa also underlined the need for good governance. The report shows that in parts of the country where the Government is better able to enforce the law, a large percentage of farmers (61 per cent) said that they did not cultivate opium because it is banned. In the south-west, where the writ of the central Government is weaker, only 39 per cent of farmers cited the ban as the reason for not growing poppies.

There is a strong correlation between insurgency and cultivation. The UNODC assessment shows that almost 80 per cent of villages with very poor security conditions grew poppy, while opium grows in only 7 per cent of villages unaffected by violence. "This is further proof of the overlap between high insecurity and high cultivation," said Mr. Costa.

"The message is clear: in order to further reduce the biggest source of the world's deadliest drug, there must be better security, development and governance in Afghanistan," said the head of UNODC. "The Afghan authorities must lead and own their drug control strategy: the rest of the world has a vested interest in its success," said Mr. Costa.