Guinea-Bissau: UNODC to support set up of police academy 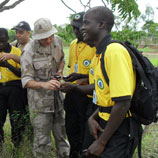 22 January 2010 - Facing chronic political instability during the post-civil war period, Guinea-Bissau has been trying to rebuild the pillars of peace, human rights, security, justice and integrity. To support this, the UNODC Regional Office for Brazil and the Southern Cone has facilitated an agreement between the Government of Brazil and the Government of Guinea-Bissau to construct a training centre for the country's security forces.

During the late 1990s, Guinea-Bissau faced a civil war resulting in political instability, which led to the destruction of infrastructure and drastically reduced the local gross domestic product. The civil conflict also resulted in thousands of refugees fleeing Guinea-Bissau to different countries in Africa. The atmosphere of insecurity became an obstacle to the country's economic and social development, discouraged investment by diverting limited resources to unproductive expenditure and fostered crime.

In addition, a recent report by UNODC Drug Trafficking as a Security Threat in West Africa demonstrated how Guinea-Bissau is under siege by drug traffickers. The country has become the hub of a new cocaine trafficking route from South America via West Africa to supply growing demand for illegal drugs in Europe. There is an urgent need to tackle organized crime - in the broader context of security sector reform - and to strengthen administration of justice and the rule of law.

The creation of a police academy will boost the country's police forces and support the Government to implement the National Plan to Fight Drugs and Crime, supported by the UNODC Regional Office for West and Central Africa. With an investment of US$ 3 million from the Brazilian Agency for Cooperation, the project will, over a three year period, build the technical capacity of local police and help regulate the police force according to internationally recognized standards. The Government has designated 30,000 square metres for the academy in Bissau, the capital.

UNODC will be working with the Brazilian Federal Police Department, which will coordinate activities for the new police academy. Since 2008, that Department has been carrying out a training programme for foreign security officials, supported by UNODC. In two years, 158 officers from Argentina, Brazil, Paraguay, Uruguay and African Portuguese-speaking countries were trained at the Brazilian Police Academy. Guinea-Bissau sent 66 participants - more than half of its entire judicial police.

According to Bo Mathiasen, UNODC representative for Brazil and the Southern Cone, organized crime operates on several fronts and does not respect borders. "We must then face crime locally and globally through international cooperation," said Mr. Mathiasen during the graduation ceremony for one class of foreign officials.

By strengthening cooperation between Brazil and Guinea-Bissau, UNODC reinforces its commitment to improve South-South cooperation, in which developing countries with common historical and cultural traits help each other to find development solutions and share successful experiences on how to boost the living conditions of their citizens.

The agreement represents a firm consolidation of South-South cooperation and recognizes UNODC as the first United Nations agency in Brazil to implement a cooperation project in this context.

10 stories the world should hear more about