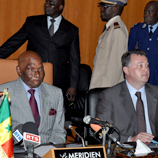 8 July 2010 - Corruption poses a major threat to economic growth, effective governance and national industrial and social development. West Africa as a whole is particularly affected in this regard. In order to consolidate a joint response to corruption in the region, the Office of the President of Senegal and UNODC organized a forum in Dakar from 21 to 23 June 2010.

Senegalese President Abdoulaye Wade joined representatives from the Economic Community of West African States (ECOWAS), the African Union, government officials, ambassadors, United Nations officials and civil society members to discuss the development of a regional workplan that will help West African anti-corruption agencies to become more effective and to discuss the adoption and implementation of the United Nations Convention against Corruption.

The draft workplan contains elements on enhanced cooperation, in particular South-South cooperation; policy and technical support; information exchange; and the sharing of good practices at the regional level. The workplan also covers the official establishment of national anti-corruption agencies and the development of common policies, measures and tools to fight corruption.

Another important objective is to develop and strengthen evaluation and methodological tools for assessing the impact of anti-corruption activities. Members agreed to develop joint training activities in law enforcement and the judiciary, in combination with staff exchange programmes.

The West African States represented at the forum showed their strong commitment to the Convention against Corruption, as well as to the African Union Convention on Preventing and Combating Corruption and the ECOWAS Protocol on the Fight against Corruption. Members agreed to promote further the ratification and implementation of the Convention against Corruption and to participate in the mechanism for the review of that Convention. They also reviewed the global efforts made and the lessons learned by various anti-corruption agencies in West Africa and called for the greater involvement of civil society and international development partners in the fight against corruption.

A joint website will be established to collect data on anti-corruption measures and tools. Initiatives for joint research will culminate in a comprehensive study of corruption in West Africa. As President Abdoulaye stressed: "We have the will to fight corruption. We need to be uninhibited with those who make us think that our countries are corrupt. I reject that and I cannot accept it. Africa is not corrupt, even if there are some corrupt individuals."