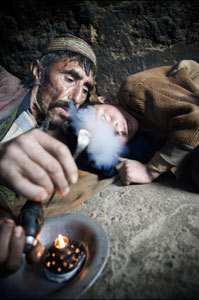 22 June 2010 - Afghanistan, the world's leading producer of opium and heroin, is also facing a major and growing problem with drug abuse, the UNODC survey Drug Use in Afghanistan reveals. The survey shows that around 1 million Afghans between the ages of 15 to 64 are addicted to drugs. At 8 per cent of the population, this rate is twice the global average.

Afghans have long used opium to relieve pain, to self-medicate. Yet the impact is largely negative. Opiate use creates behavioural, social and health problems, crime, accidents and loss of productivity in the workplace.

"We are facing a national tragedy," said Ibrahim Azghar, Afghanistan's Deputy Minister of Counter Narcotics, at the launch of the report in Kabul.

Worryingly, UNODC statistics also show that as many as 50 per cent of parents who use drugs in the north and south of the country give opium to their children. "This risks condemning the next generation of Afghans to a life of addiction," said Mr. Costa.

Providing drug treatment to users is key to revert the uphill trend. However, an estimated 700,000 Afghans have no access to treatment. Centres are operational across a mere 21 of 34 provinces and can only provide treatment to some 10,000 drug users a year.

"Treatment remains inaccessible to one third of the country. Let's not forget in our efforts to curb narcotics production in Afghanistan that many of its people are also victims of the devastating effects of opiates," said Robert Watkins, the Secretary-General's Deputy Special Representative for Afghanistan.