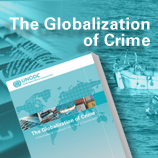 17 June 2010 - A report released today by UNODC shows how organized crime has globalized and turned into one of the world's foremost economic and armed powers.

The Globalization of Crime: A Transnational Organized Crime Threat Assessment, released at the Council of Foreign Relations in New York, looks at major trafficking flows of drugs (cocaine and heroin), firearms, counterfeit products, stolen natural resources and people (for sex and forced labour), as well as  smuggled migrants. It also covers maritime piracy and cybercrime.

"Today, the criminal market spans the planet: illicit goods are sourced from one continent, trafficked across another and marketed in a third," said UNDOC  Executive Director Antonio Maria Costa. "Transnational crime has become a threat to peace and development, even to the sovereignty of nations," warned the head of UNODC. "Criminals use weapons and violence, but also money and bribes to buy elections, politicians and power - even the military," said Mr. Costa. The threat to governance and stability is analysed in a chapter on regions under stress.

The report shows how illegal exploitation of natural resources and the trafficking in wildlife from Africa and South-East Asia are disrupting fragile ecosystems and driving species to extinction. UNODC estimates that illicit wood products imported from Asia to the European Union and China were worth some US$ 2.5 billion in 2009. Regarding cybercrime, the report reveals that more than 1.5 million people a year suffer the theft of their identity for an economic loss estimated at US$ 1billion, and that  cybercrime is endangering the security of nations: power grids, air traffic and nuclear installations have been penetrated.