New courtroom in Mombasa to bring pirates to justice 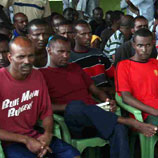 25 June 2010 - There has been a lot of attention about chasing pirates off the Horn of Africa, but what happens when they are caught? Most piracy suspects have been taken to Kenya, particularly the port of Mombasa. This has presented a challenge to the Kenyan justice system, in terms of collecting evidence, prosecuting cases and holding Somali pirates in detention.

UNODC has been assisting Kenya to bring pirates to justice by working with police, prosecutors, courts and prison systems within the country. This has had wider benefits for the Kenyan justice system, not just piracy trials.

A major milestone came on 24 June when the Minister of Justice of Kenya, Hon. Mr. Mutula Kilonzo, opened a new high-security courtroom in Shimo La Tewa, Mombasa, where cases of maritime piracy and other serious criminal offences will be heard. The court was built through the UNODC Counter-Piracy Programme with contributions from Australia, Canada, France, Germany and the United States, as well as the European Union.

With Kenya having taken on the largest number of suspected pirates for prosecution in the region - 123 to date - the new court in Mombasa is intended to increase trial efficiency in the system and provide a secure, modern environment suitable for trying piracy cases.

The opening of the court, which was attended by high-level government officials and donor representatives, was proceeded by a tour of Shimo La Tewa Prison that highlighted improvements that the UNODC Counter-Piracy Programme has made to the prison, including upgrades to the water and sanitation systems and medical, educational and kitchen facilities, for the benefit of all prisoners. Similar improvements are being undertaken in five other Kenyan prisons where convicted pirates will be detained.