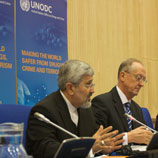 8 March 2010 - The fifty-third session of the Commission on Narcotic Drugs was opened today in Vienna by its Chairman, H.E. Ambassador Ali Asghar Soltanieh (Islamic Republic of Iran).

At its fifty-third session, the Commission will focus on effective ways of raising awareness about the risks of abusing drugs, including cannabis; improving the understanding of drug addiction as a chronic health disorder; and the importance of research and data collection.

[Slideshow of the current session of the Commission on Narcotic Drugs]

In his remarks, UNODC Executive Director Antonio Maria Costa warned that failure to control drugs will unleash a health disaster in the developing world.

"The developing world lacks the treatment facilities and law enforcement to control drugs", said the head of UNODC. "This seems to have been forgotten by people in rich countries calling for loosening of drug controls. Why condemn the third world, already ravaged by so many tragedies, to the neo-colonialism of drug dependence?", said the head of UNODC. He identified a number of warning signs: increasing use of heroin in East Africa, cocaine in West Africa and synthetic drugs in the Middle East and South-East Asia.

The United Nations' drug control chief said, "we must not only stop the harm caused by drugs: let's unleash the capacity of drugs to do good". He reminded the Commission that this seemingly radical idea goes back to the roots of drug control: in the preamble of the Single Convention on Narcotic Drugs of 1961 it is recognized that "the medical use of narcotic drugs continues to be indispensable for the relief of pain and suffering". He appealed to Member States to overcome cultural and socio-economic factors "that deny a Nigerian suffering from AIDS or a Mexican cancer patient the morphine offered to Italian or American counterparts". 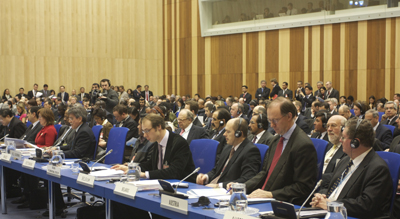 He also appealed for greater respect for human rights. "As human beings, as well as members of the community of civilized nations, we have a shared responsibility to put an end to this. People who use drugs, or are behind bars, have not lost their humanity or their human rights". Mr. Costa stressed the need for greater attention to security, justice and development in vulnerable regions - a process which UNODC is supporting in the Balkans, Central and West Asia, Central America, and East and West Africa.

This week-long session of the Commission will include thematic debates; consideration of draft resolutions on, for example, the implementation of the international drug control treaties; illicit drug traffic and supply and related measures; as well as follow-up to the Political Declaration and Plan of Action on International Cooperation towards an Integrated and Balanced Strategy to Counter the World Drug Problem ( see full programme).

The Commission on Narcotic Drugs is the central policymaking body within the United Nations system dealing with drug-related matters, and also the governing body for the drugs related work of UNODC. The Commission monitors the world drug situation, develops strategies on international drug control and recommends measures to combat the world drug problem, including through reducing demand for drugs, promoting alternative development initiatives and adopting supply reduction measures.