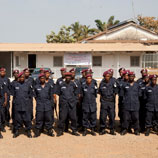 11 March 2010 - Over the past five years, West Africa has emerged as a hub for cocaine trafficking between Latin America and Europe. The issue has gained the attention of the international community, including the Security Council and the Economic Community of West African States (ECOWAS).

UNODC has been instrumental in ringing the alarm bell, providing evidence about the scale of the threat and technical assistance to alleviate it.

During a recent visit to West Africa, UNODC Executive Director Antonio Maria Costa assessed national and regional progress in countering the threat posed by drugs and crime and in identifying what more needs to be done.

On 15 February, Mr. Costa took part in a ministerial meeting of the Groupe de Dakar. He praised the Group (made up of Senegal and its neighbours) as an example of how neighbours can work together to fight transnational threats.

Mr. Costa then travelled to Freetown for a ministerial meeting of the West Coast Initiative (WACI). The four countries currently involved in the initiative - Côte d'Ivoire, Guinea-Bissau, Liberia and Sierra Leone - adopted the Freetown Commitment, which supports implementation of the ECOWAS Regional Action Plan against drugs and crime adopted at a ministerial meeting in Praia in October 2008. The Commitment is designed to increase specialized counter-narcotics law enforcement capacity as well as reinforce national criminal justice capacity. As Mr. Costa said, "until countries of West Africa can control their airspace, their coasts and borders, they will not be able to control drugs or crime - or protect their sovereignty".

One of the main aims of WACI is to establish transnational crime units to gather operational intelligence on criminal activities. Sierra Leone's Joint Drug Interdiction Task Force is a good example, as Mr. Costa discovered when visiting the Task Force's headquarters in Freetown. Such national Units would eventually be linked to each other to exchange information in real time on the basis of trust.

At the WACI meeting, Mr. Costa cited cooperation among the Department of Political Affairs and the Department of Peacekeeping Operations of the Secretariat, the United Nations Office in West Africa and UNODC as a good example of a "one UN" approach to crime control. He also praised the United Nations Integrated Peacebuilding Office in Sierra Leone for mainstreaming criminal justice into the United Nation's peacebuilding activities. Recently, in presidential statements issued on 8 December 2009 and 24 February 2010 , the Security Council called for the issue drug trafficking (and organized crime more generally) to be mainstreamed into conflict prevention strategies, conflict analysis, integrated missions' assessment and planning, and peacebuilding support.

Until recently, most cocaine being shipped to West Africa was transferred by boat or light aircraft. Now there are signs that traffickers are using fleets of large cargo planes and that they are flying further inland. "In most cases, they are not flying under the radar - there is no radar!", said Mr. Costa. "It is shocking that many of the recent discoveries of large cargo planes carrying drugs and weapons into the Sahel have been by chance", he said. Therefore, while in West Africa, Mr. Costa discussed the possibility of establishing a network of monitoring stations along the coast and into the Sahel. The proposal, which he first raised at the Security Council meeting on 8 December 2009, aims to close what he describes as "black holes" in the current system which enable a dangerous nexus between drugs, crime and terrorism.

In Mali, Mr. Costa, together with a number of Government ministers, launched an integrated national programme on trafficking and organized crime. He also inaugurated a UNODC project office in Bamako in order to assist with the implementation of the programme. "This strengthens our presence in the region, demonstrating our commitment to address threats across the Sahel", he said.

From Mali, the UNODC delegation flew to Ougadougou, to meet with the President of Burkina Faso, Blaise Compoare. Burkina Faso has been active in the fight against drug trafficking by presiding over a debate on the issue in the Security Council in December 2009, and through its Presidency of ECOWAS in 2008. In response to the request of the Government, Mr. Costa confirmed that UNODC will assist in the development of a national integrated programme on drugs and crime tailored to the needs of the country.

According to Alexandre Schmidt, UNODC Regional Representative for West and Central Africa, "these developments in West Africa demonstrate progress in implementing the ECOWAS Praia Process, and UNODC's unwavering commitment to the region".