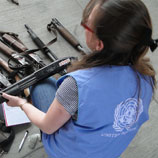 The programme, entitled National Integrated Programme on the Strengthening of the Rule of Law, Security and Justice in Guatemala, will help the Guatemalan Government to implement criminal justice, police and prison reforms, firearms control, and deal with corruption, cybercrime and human trafficking.

The programme will be implemented jointly by the Government and UNODC, and complement related activities being carried out by the International Commission against Impunity in Guatemala and the Central American Integration System. Mr. Costa appealed to funding partners to provide sufficient resources to implement the full range of activities designed to strengthen security and justice.

Guatemala's geographical position exacerbates the problem, as the country is caught in the crossfire between the world's biggest producers of coca (Andean countries) and the world's biggest consumers of cocaine (North American countries). A growing share of the 200 tons of cocaine that flow north every year is transiting Central America and sowing a path of death and destruction. The same routes are also being used to traffic irregular migrants and weapons. In 2009, 15.7 tons of cocaine were seized, including 10 tons found on a mini-submarine off the coast.

The lucrative drugs trade, estimated to be worth twice Guatemala's gross domestic product, is a major source of corruption, undermines the rule of law and threatens security. Drugs are also a source of revenue for youth gangs ( maras). The police, drug law enforcement agents and senior officials are coerced by the bullet and the bribe. Some provinces along key trafficking routes have the highest murder rates in the world (around 100 murders per 100,000 inhabitants).

Mr. Costa announced that UNODC will establish a centre of excellence on organized crime in Guatemala City. The Centre will support the development of applied research, data collection and analysis on crime trends, and provide training to national and regional authorities on countering organized crime. It will be part of a regional network of centres of excellence on urban crime prevention (in El Salvador), maritime security (in Panama) and drug demand reduction and prison reform (in the Dominican Republic).

As a first symbolic step in the implementation of the national anti-crime programme in Guatemala, Mr. Costa and President Colom presided over the destruction of over 6,000 illegal firearms. According to Government estimates, there are around 400,000 registered weapons in the country and 1.6 million illegal weapons in circulation - more than one gun for every 10 inhabitants. Almost 80 per cent of homicides in Guatemala are committed with firearms. In 2009, there were more than 5,300 homicides. A high number of women (722) and children (591) were among the victims. "Destroying these guns can reduce violent crime in Guatemala, but there are plenty more swords to turn into ploughshares", said Mr. Costa.

Images for broadcasters will be available on 18 March 2010 at 3 p.m. GMT on the following links: