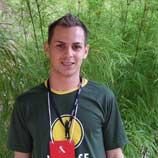 25 May 2010 - "I know we cannot change the world," says Alexandre Ladeira. "But we can change a portion of it, and this portion is called me. It is not an easy or quick task, but it is worth trying!"

Alexandre's optimism is infectious. But it is also surprising given how much he has had to cope with in his 23 years. Alexandre has been fending for himself since the age of 13, when he told his parents about his sexual orientation and they kicked him out of the family home. He also told them he was HIV positive, and "they said it was the price I was paying for the life I led."

Those were difficult times for Alexandre. With no support from his family and knowing very little about HIV, he sought help and information about HIV from community NGOs in his hometown of Coimbra, Brazil. Step by step, his situation improved. He learned how to manage his disease and practice safe sex, and he became active in movements to fight discrimination against homosexuality and to protect the human rights of people living with HIV/AIDS. Before long, he was working at an NGO that works to prevent the spread of HIV and other infectious diseases among injecting drug users, sex workers and other vulnerable members of society. Alexandre has a natural talent for connecting with people, which makes him an excellent outreach worker, trainer and educator about the facts of HIV and safe sex practices.

Today Alexandre is taking part in a year-long leadership training programme for young people living with HIV/AIDS. The programme enhances participants' leadership skills, educates them about governmental and non-governmental HIV policies and services, and also gives them practical work experience in both government and NGO settings. In his first assignment, in the epidemiological surveillance section of his state's health ministry, Alexandre is learning about management of HIV/AIDS and other sexually transmitted diseases, the logistics of distributing supplies and medicines, preparation of action plans, and government interaction with civil society organizations. Later, he will work in a public service agency that advises and assists people living with HIV/AIDS, and in a civil society organization involved in community mobilization around HIV/AIDS.

"I believe that many young people today do not know their rights," Alexandre says. "I see in this training programme the opportunity for a young person living with HIV to overcome difficulties and prejudices, expand his or her understanding of social issues and enhance his or her professional and personal development." Smiling broadly, he adds, "I am very happy to be a part of it."

The leadership training programme in which Alexandre is participating is an initiative of the the Brazilian Ministry of Health, the NGO Pact Brazil and the United States Agency for International Development (USAID) in partnership with UNODC, UNAIDS and other United Nations entities.

The United Nations, through the Joint United Nations Programme on HIV/AIDS (UNAIDS) and UNODC, is also supporting the AIDS 2010 conference, to be held from 18 to 23 July 2010 in Vienna. By holding the conference in Vienna, the organizers will highlight the situation in Eastern Europe and Central Asia, regions experiencing a fast growing epidemic largely through unsafe injecting drug use.