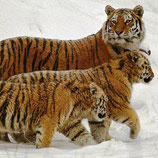 24 November 2010 - Global tiger numbers have plummeted from about 100,000 a century ago to about 3,200 to 3,500 today, and they continue to fall. In the last decade alone, tiger numbers and habitat have declined by 40 per cent, due to degradation, fragmentation and loss of habitat; poaching of tigers and their prey; the illegal wildlife trade; and human-tiger conflict.

On 21 November , heads of state and senior diplomats from 11 key countries gathered in St. Petersburg, the first time world leaders have met, to discuss the fate of tigers. Backed by the World Bank and other international organizations including UNODC, the Tiger Summit has been billed as the last chance to save the tiger. The tiger is protected under the Convention on International Trade in Endangered Species of Wild Fauna and Flora (CITES), an agreement among 175 nations to ensure that international trade in specimens of wild animals and plants does not threaten their survival.

Addressing the summit, UNODC Executive Director Yury Fedotov said, "The United Nations Secretary-General, Ban Ki-moon, has asked me to convey his strong support of this timely Forum. He welcomes this initiative and expects it to achieve tangible results".

A 2010 UNODC survey, The Globalization of Crime notes: "hunting of tigers is deliberate and systematic and there is evidence that 'commissioning' may occur". One of the chief threats, if not the chief threat, to the survival of tigers in the wild is the highly lucrative illegal trade in tigers and tiger parts, including tiger skins, bones, claws, eyes, ears and other organs.

"In 2009, tiger skins retailed for up to $20,000, and bones were selling for up to $1,200 per kilogram. UNODC conservatively estimates that the annual market volume for tiger parts is about 150 tiger skins and about 1,500 kilograms of bones, with an estimated total market value of about $5 million. As we know, 150 tigers represent almost 5 percent of the remaining tigers in the wild. If we do no stop tiger trafficking now, criminals will drive this magnificent beast to extinction within a few short years." said Mr. Fedotov.

Stressing that ending wildlife crime against tigers and other endangered species, particularly transnational trafficking, requires a coordinated global response, Mr. Fedotov added: "At the national level, we need to strengthen law enforcement capacity to deal with this and environmental crime more broadly. Internationally, we must encourage and develop a culture of cooperation and criminal intelligence sharing to stop transnational trafficking in endangered species."

UNODC is the custodian of the two international Treaties (the Convention against Organized Crime and the Convention Against Corruption) whose mandates and priorities are combating transnational organized crime and corruption. ", added Mr. Fedotov. "Thanks to our expertise based on UN standards and norms in crime prevention and criminal justice, combined with many years of experience helping States to fight crime, UNODC is well positioned to support the Tiger Range Countries. We can help them enhance their capacity to identify, trace, freeze and confiscate the proceeds of these activities; improve information sharing and enhance regional and international law enforcement cooperation."said Mr. Fedotov.

In order to boost tiger conservation efforts in addition to its larger mandate of addressing environmental crime, UNODC teamed up with the World Customs Organization (WCO), CITES, World Bank and INTERPOL to establish the International Consortium on Combating Wildlife Crime. During the Summit,  the heads of these institutions signed a memorandum of understanding, chaired by Mr. Vladimir Putin.

The aim of this partnership will be to provide coordinated services to Tiger Range Countries to help implement a global support programme on combating wildlife crime. INTERPOL and WCO will support operational interdiction efforts, while UNODC and CITES will support assessments and capacity building, based on specific country demands. The World Bank will provide additional support, including financial services, to this partnership.

Being part of the Consortium opens a new era for UNODC's engagement in environmental crime, with initial focus on wildlife crime. UNODC's expertise and experience in supporting Member States' policy formulation and capacity building in fighting other forms of serious organized crime (such as illicit drug trafficking) is seen to be highly relevant. Mr. Fedotov believes that UNODC will be able to play a leading role in the Consortium.

In addition, UNODC is currently developing a "Wildlife and Forest Crime Assessment Toolkit" which will be ready in early 2011. The World Bank has been a key contributor to the Toolkit formulation process, especially on the natural resources management angle.