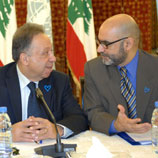 "The Government of Lebanon is ready to act to end trafficking in persons in the country," said Prime Minister Mikati in a statement read on his behalf. "We shall utilize all possible resources available to us to help to spread awareness among the public and to ensure justice for victims of trafficking. Through the Ministry of Justice and the Ministry of Interior, my Government will improve on efforts to better equip law enforcement officials, judges and social workers to be sensitive to dealing with human trafficking cases," he added.

Speaking at the launch, Mr. Masood Karimipour, Regional Representative of the UNODC Regional Office for the Middle East and North Africa, said: "We are very pleased to note that Lebanon is the first country in the region to join the Blue Heart campaign. We were also pleased to note that, despite the many challenges faced by the country, Lebanon adopted an anti-trafficking law on 1 September 2011."

Lebanon's new anti-trafficking law was developed in line with the provisions of the Protocol to Prevent, Suppress and Punish Trafficking in Persons, especially Women and Children, supplementing the United Nations Convention against Transnational Organized Crime.

Among other things, the new law establishes human trafficking as an offence punishable by 5 to 10 years' imprisonment. It exempts victims of organized crime from punishment and sets out adequate measures to protect victims and witnesses.

"We are proud of our collaboration in Lebanon with the Ministry of Justice and the Ministry of the Interior. We thank our donors, the Netherlands and Switzerland, for their unwavering support of our efforts to fight human trafficking. I also salute the work on the ground of the Directorate of General Security, as well as NGOs and civil society, who are raising awareness and protecting victims. UNODC fully supports the Government of Lebanon in its efforts against human trafficking and other challenges, including drug control and crime prevention," added Mr. Karimipour. 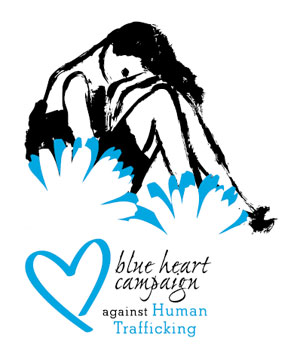 Mr. Karimipour announced that under the UNODC Regional Programme on Drug Control, Crime Prevention and Criminal Justice Reform in the Arab States 2011-2015, the Office is initiating a regional effort against human trafficking, in cooperation with Arab countries and the League of Arab States and with the support of Qatar and Norway.

As part of awareness-raising efforts under the Blue Heart campaign in Lebanon, UNODC has supported local NGO Caritas Migrants and law enforcement officials in publishing booklets in local languages for vulnerable groups such as domestic workers. The booklets, to be distributed at airports, provide information about forms of human trafficking and the recently adopted anti-trafficking law.

UNODC has unveiled a national billboard advertising campaign on the Blue Heart Campaign, published advertisements in magazines and on related websites and organized forums on human rights issues and human trafficking in several Lebanese schools. Blue Heart Campaign stands have also been established at some main shopping malls in the city to provide information on the campaign and the law against human trafficking.