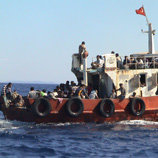 The total number of deaths among migrants trying to cross the seas from Africa to Europe is unknown. However, an estimated 1,000 lose their lives each year. The International Catholic Migration Commission puts the number higher, reporting that 2,000 people lost their lives in the first months of 2011. In May 2011, for instance, 61 people died of dehydration and starvation on board a boat in the Mediterranean Sea.

"Effective action in this crucial area requires a comprehensive approach that confronts the underlying issues of migration and development, especially those related to poverty," says UNODC Executive Director Yury Fedotov.

As immigration channels become more limited, more people seek the assistance of smugglers, who endanger the lives and safety of migrants in their increasingly risky efforts to circumvent border controls. Moreover, there are reports of both State and private vessels failing to rescue migrants in distress at sea, despite being in a position to do so.

Mr. Fedotov believes that in order to effectively address those crimes, which present low risks but offer high profits for the criminals involved, States need to take an integrated approach by implementing laws and policies on transnational crime, immigration and border control.

"States must also cooperate with each other while ensuring that traffickers and smugglers are prosecuted. In following this path, we need to mainstream human rights by protecting the rights of the trafficked victims and the smuggled migrants," he adds.

It is hoped that the practical experiences of responding to the smuggling of migrants by sea, addressed by the issue paper from the perspectives of countries of origin, countries of transit and countries of destination, will help other Member States in formulating their responses to suit their local contexts.

Mr. Fedotov urges those Member States that have not yet done so to both ratify and implement the Protocol to Prevent, Suppress and Punish Trafficking in Persons, Especially Women and Children, and the Protocol against the Smuggling of Migrants by Land, Sea and Air, supplementing the United Nations Convention against Transnational Organized Crime.

Issue paper on the smuggling of migrants by sea (pdf)

UNODC on the smuggling of migrants

Video clip on the smuggling of migrants in Africa