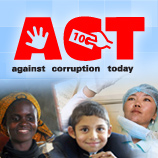 9 December 2011 - As the world marks International Anti-Corruption Day today, Secretary-General Ban Ki-moon has called on all individuals to act against the cancer of corruption.

"Although the poor may be marginalized by corruption, they will not be silenced. In events across the Arab world and beyond this year, ordinary people have joined their voices in denouncing corruption and demanding that governments combat this crime against democracy. Their protests have triggered changes on the international scene that could barely have been imagined just months previously," he said.

The United Nations is helping countries to combat corruption as part of a broader, system-wide campaign to help bolster democracy and good governance. The United Nations Convention against Corruption is a powerful tool in furthering those efforts.

Mr. Ban urged all Governments that had not yet ratified the Convention to do so without delay, and said that companies could create a more transparent global economy through anti-corruption initiatives, including the work of the United Nations Global Compact.

In his own statement, UNODC Executive Director Yury Fedotov said: "Reductions in poverty and achievement of the Millennium Development Goals are directly threatened by corruption. As a result, across the globe, on any day, at any given time, the hopes and aspirations of ordinary people are being ruined by corruption."

Mr. Fedotov went on to say that the Stolen Asset Recovery (StAR) Initiative under the Convention is ensuring that funds hidden abroad are repatriated, while development programmes in countries of transition are helping ordinary people to rebuild their lives and restore democratic institutions.

Since 2009, UNODC and the United Nations Development Programme (UNDP) have marked International Anti-Corruption Day with a joint campaign, this year under the theme "ACT - Against Corruption Today". Through use of free campaign materials available online, UNODC and UNDP encourage non-governmental organizations (NGOs) and other civil society partners across the globe to help to spread the message that prevention of corruption is the responsibility of everyone.

The theme embodies the spirit of the Convention, which recognizes that the prevention and countering of corruption require a multisectoral approach involving all, including civil society, NGOs, community-based organizations and the media.