UNODC and OSCE join efforts to tackle crime and drugs 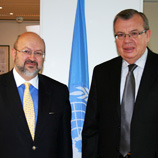 Other areas of cooperation will be the countering of transnational organized crime, corruption and money-laundering and the combating of trafficking in persons, irregular migration and the smuggling of migrants.

"We are pleased to join hands with OSCE. In cooperating, UNODC and OSCE draw upon their respective comparative advantages: UNODC through its mandate to provide technical assistance in response to the interrelated issues of organized crime and illicit drugs; and OSCE as a political platform for dialogue with a network of field operations working to promote security in its political, military, economic, environmental and human dimensions," said Mr. Fedotov.

OSCE Secretary-General Lamberto Zannier said: "For several years, UNODC and OSCE have met regularly to review the results of cooperation between the two organizations and to plan for the future. The decisions taken by OSCE foreign ministers at their recent meeting in Vilnius to strengthen and consolidate the Organization's work to address transnational threats and its cooperation with Afghanistan should enable us to reinforce this process. We are prepared to enhance our cooperation with UNODC in addressing the common challenges of terrorism, organized crime, trafficking in human beings and illicit drugs."

Under the joint action plan, the two parties will, among other activities, improve coordination in the field in order to avoid duplication of work; conduct expert-level consultations on common issues; draw on existing successful programmes in the field to develop best practices; undertake joint assessments, such as in the area of opiate trafficking, in priority countries; and cooperate in implementing regional initiatives, such as the recently launched UNODC-led Regional Programme for Afghanistan and Neighbouring Countries.

The two parties will promote the ratification and legislative implementation by OSCE participating States of international counter-terrorism instruments and cooperate in raising awareness of and encouraging the implementation of protocols such as the OSCE Document on Small Arms and Light Weapons and the Protocol against the Illicit Manufacturing of and Trafficking in Firearms, Their Parts and Components and Ammunition, supplementing the United Nations Convention against Transnational Organized Crime, in addition to other United Nations conventions and related protocols.

With 56 participating States in Europe, Central Asia and North America, OSCE is the world's largest regional security organization. It offers a forum for political negotiations and decision-making in the fields of early warning, conflict prevention, crisis management and post-conflict rehabilitation, and puts the political will of its participating States into practice through its network of field missions.

Organization for Security and Cooperation in Europe