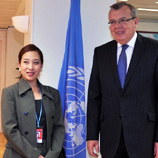 15 December 2011 - UNODC Executive Director Yury Fedotov met with Her Royal Highness Princess Bajrakitiyabha Mahidol of Thailand as she led a delegation to the reconvened twentieth session of the Commission on Crime Prevention and Criminal Justice, which was held in Vienna on 12 and 13 December.

Mr. Fedotov expressed condolences to the families of more than 600 Thai nationals who lost their lives in the recent floods in Thailand and to all others affected by that crisis, and said that UNODC would provide assistance in post-crisis activities.

Mr. Fedotov welcomed Thailand as a new State Party to the United Nations Convention against Corruption (as of March 2011) and reiterated the readiness of UNODC to provide technical cooperation to assist full implementation of the Convention.

Her Royal Highness Princess Bajrakitiyabha is a vocal supporter of and advocate for the humane treatment of female prisoners. In Thailand, Her Royal Highness runs a project that provides assistance and support to female and pregnant inmates, as well as their children, and fosters their reintegration into society.

Mr. Fedotov commended Her Royal Highness for her strong, personal commitment to efforts to improve the conditions and treatment of women in prisons, and acknowledged Thailand's leadership and political vision in the development of the United Nations Rules for the Treatment of Women Prisoners and Non-custodial Measures for Women Offenders (the Bangkok Rules).

On drug trafficking in Thailand, Mr. Fedotov welcomed Thailand's active participation in implementation of the Memorandum of Understanding on Drug Control signed between six States of the Greater Mekong subregion and UNODC. "UNODC is fully committed to supporting effective implementation of evidence- and community-based treatment and care of people with drug dependence problems and a rights-based approach to the application of law enforcement," he added.

On 13 December 2011, Her Royal Highness Princess Bajrakitiyabha Mahidol was elected chair of the twenty-first session of the Commission on Crime Prevention and Criminal Justice and will serve in that capacity, leading the work of the session throughout 2012 and chairing its regular and reconvened meetings.