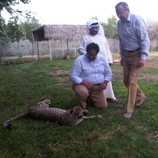 17 February 2011 - UNODC Executive Director Yury Fedotov yesterday visited the Breeding Centre for Endangered Arabian Wildlife in Sharja, Abu Dhabi, which helps to save species such as the Arabian leopard and serves as a base for research on rare animals native to the Arabian Peninsula.

The Centre has built strong ties with similar programmes, government departments and research institutions at the regional and international levels to promote the wildlife conservation and awareness of wildlife crime, such as the widespread trade in animal parts.

Speaking at the Centre, Mr. Fedotov said: "Ending wildlife crime against endangered species, particularly transnational trafficking, requires a coordinated global response. At the national level, we need to strengthen law enforcement capacity to deal with this and environmental crime more broadly. Internationally, we must encourage and develop a culture of cooperation and criminal intelligence-sharing to stop transnational trafficking in endangered species."

The Director of the Centre, Abdel Jalil Abdel Rahim Mohamed, said: "We are looking forward to partnership with UNODC in implementing the Convention on International Trade in Endangered Species of Wild Fauna and Flora (CITES) to ensure that we conserve our wildlife and that we put into place tough measures to block trade in specimens of Arabian wildlife."

"Thanks to our expertise based on United Nations standards and norms in crime prevention and criminal justice, combined with many years of experience helping States to fight crime, UNODC is well positioned to support the fight against wildlife crime. We can help States to enhance their capacity to identify, trace, freeze and confiscate the proceeds of these activities; improve information-sharing and enhance regional and international law enforcement cooperation", said Mr. Fedotov.

In November 2010, UNODC, the CITES Secretariat, INTERPOL, the World Customs Organization and the World Bank established the International Consortium on Combating Wildlife Crime. The aim of that partnership will be to provide coordinated services to help countries to combat wildlife crime. UNODC is hosting an expert group meeting for members of the Consortium on 24 and 25 February in Vienna to work on specific areas of cooperation.