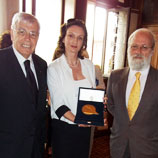 At the ceremony for the forty-first Asiago International Awards for Philatelic Art, held in Italy on 17 July, UNPA received the prize for "best stamps in the world" for 2010. The winning stamp sheets highlighted "Human Trafficking - Blue Heart Campaign (UNODC)"  by UNPA Vienna and "Against Child Labour (ILO and GenevaWorld)" by UNPA Geneva.

Speaking at the ceremony, Clarissa Fürnsinn, representing UNPA Europe, said: "United Nations stamps draw attention to significant world problems and serve as a reminder of the United Nations' commitment to its goals. The United Nations Postal Administration is honoured to receive this precious prize. The UNPA will continue illustrating the aims and the achievements of the United Nations and its organizations to raise awareness through the issuance of stamps on important subjects of a global scale."

UNPA Vienna issued a special stamp sheet on the theme "human trafficking" on 5 February 2010. The Blue Heart Campaign is an awareness-raising initiative developed by UNODC to fight human trafficking and its impact on society. The campaign aims to inspire decision makers to effect change, as well as to encourage the involvement of all areas of society to help stop this crime. The campaign allows people to show solidarity with the victims of human trafficking by wearing the blue heart as an international symbol against this crime. The blue heart represents the sadness of those who are trafficked while reminding us of the cold-heartedness of those who buy and sell fellow human beings.

On 2 September 2010, UNPA Geneva issued a stamp sheet on the theme "child labour". The drawings featured on the stamps show the grim realities of exploited young people. The selected images are part of "Children's Views of Child Labour", a vast initiative promoted in 2009 by GenevaWorld in partnership with the International Labour Organization (ILO) and with the support of local volunteers to mark the tenth anniversary of the adoption of the ILO Convention concerning the Prohibition and Immediate Action for the Elimination of the Worst Forms of Child Labour.