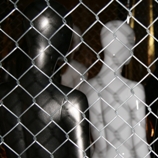 08 March 2011 - A global industry worth approximately $32 billion. Millions of goods moved all the time. Is this one of today's great corporate success stories? Hardly - this is the illicit world of human trafficking, a major network which sees around 2.4 million women, children and men trapped in slave-like conditions at any given time. Through sexual exploitation, forced labour, domestic servitude and child begging, people the world over are held against their will.

On 8 March - International Women's Day - UNODC announced a new small grants facility for victims of human trafficking, a symbolic move given that two-thirds of trafficking victims are women and children.

Speaking at the launch of the grants facility, UNODC Goodwill Ambassador and Academy Award-winning actress Mira Sorvino called for the prioritization of assistance to victims: "Through my work in various parts of the world I have seen with my own eyes the unspeakable pain trafficking victims go through: from girls stolen from their homes or sold by their own parents into sex work, to men enslaved and made to perform torturous labour, to children whose innocence and safety are ripped from them at the hands of adults whose only concern is their profitability. As a victims' advocate in the fight against human trafficking, I encourage each and every person to work together in tackling this crime: modern day slavery only exists because we tolerate it."

As part of the UNODC-managed United Nations Voluntary Trust Fund for Victims of Human Trafficking, nearly $1 million has been mobilized, with grants to be issued over the coming months to front-line organizations helping those most affected by such trafficking.

In addressing the event, UNODC Executive Director Yury Fedotov spoke of the critical steps being taken in promoting a more victim-centred approach to human trafficking: "The launch of this small grants facility is the first concrete step in rolling out the Global Plan of Action to Combat Trafficking in Persons adopted by the United Nations General Assembly in 2010. As a coordinated and comprehensive approach to end human trafficking in all its forms, the Trust Fund will make a real difference to the lives of those who need it most."

Sharing her harrowing tale as a trafficking victim, "Miss S", a Lithuanian national trafficked to the United Kingdom for the purpose of sexual exploitation, spoke of the needs of victims and the critical importance of grass-roots organizations in meeting those needs: "We just want to be treated with respect like 'normal' people. It can often be difficult to get access to things like banking, employment opportunities and further education. We don't want to be judged - we just want to be helped to lead as normal a life as possible." 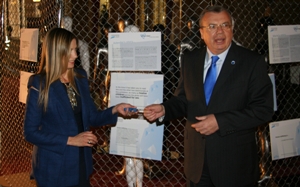 UNODC estimates that in Europe alone, trafficking is worth an annual total of $3 billion and some 140,000 people are trapped in a vicious cycle of violence, abuse and degradation across the continent. Globally, a disturbing 1 in 5 victims are children, that proportion rising drastically in poorer regions: "Our fellow human beings are sold like goods - it's time we renew our stance towards this terrible practice and work to beat this crime", said Mr. Fedotov.

The Trust Fund supports the timely provision on the ground of humanitarian, legal and financial aid to victims of trafficking through a range of avenues and provides the opportunity for people from all walks of life to contribute in a meaningful manner and to assist victims of human trafficking to reclaim their lives and rebuild their futures.