The crucial role of coca crop monitoring in Bolivia 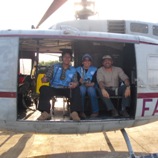 12 May 2011 - With Bolivia hosting the world's third largest area of coca plantations UNODC's work is in the country is seen as a critical endeavour. Amongst the array of aspects carried out in working towards curbing drug production, trafficking and use, a crucial one at source is that of crop monitoring.

It was with immense sadness, that UNODC learnt late-last week of the death of four colleagues whose work in crop monitoring was key in efforts aimed at reducing the supply of illicit drugs. Leonardo Iván Alfaro Santiago, Patricia Olga Delgado Rúa, Mariela Cinthia Moreno Torreblanco and Stephan Javier Campos Ruiz were all dedicated members of UNODC whose commitment towards their work and unwavering knowledge and belief that they were building a better world encapsulates the spirit of the United Nations.

Iván played an instrumental role in the establishment of the Bolivian coca monitoring programme ten years ago and possessed an immense knowledge about the coca situation and related environmental issues. He is survived by two daughters.

Patricia had been part of the project since 2004, serving as an expert on geographic information systems and as Ivan's trusted deputy. She leaves behind her husband.

Mariela and Stephan both joined the project in 2009, and were dedicated members of the team. Mariela is survived by her parents and Stephan leaves behind his wife and three small children.

It is in memoriam of these members of UNODC that the following insight into drug crop monitoring in Bolivia is written. It is dedicated to the memory and work of these and other UNODC colleagues whose lives has been lost in working towards reducing illicit drugs for a safer tomorrow.

Since its inception in Latin America a decade ago, UNODC's crop monitoring work has provided a clearer picture of the size and extent of areas under cultivation and pointed towards more sound estimations of how much cocaine is potentially being produced in Bolivia, Colombia and Peru. The work in Bolivia is possible thanks to the generous support of the European Union and the Governments of Denmark, France, Spain, the United Kingdom and the United States.

Through providing crop monitoring services across these three countries, the monitoring process provides a baseline from which to work, enhanced insight into crop levels and a better understanding of market availability - tools which have led Governments the world over to optimize their reactions in the fight against the supply of cocaine.

Data collected in the monitoring process is done by two means - satellite imagery and verification flights. The latter, which in Bolivia is carried over a three to four month period, aims to verify the satellite imagery and provide further interpretation of the images to enhance responses to the cocaine market. It was sadly during a routine flight to visually verify the data that the four colleagues along with two air force pilots who were providing support to this mission on behalf of the Bolivian Government crashed.

The monitoring process carried out by Iván and his team was a comprehensive task, with trips of up to 2-weeks at a time across an area of nearly 10,000 sq km in 2010 alone. The hours and hours of video recorded during flights coupled with the roughly 10,000 photos taken since 2002 have became crucial tools in the coca identification efforts.

By nature of the work, crop monitoring is certainly not risk-free. The location of the coca fields are often quite inaccessible, yet it was this dedication that UNODC Representative in La Paz, Cesar Guedes, commented on when speaking about the four colleagues who made up a key part of UNODC: "Iván, Patty, Mariela and Stephan showed exemplary professionalism in all their actions. Their thorough commitment to their work, to the UN values and their love for Bolivia was evident and tangible. The conviction to promote healthy lifestyles and respect for the environment was a guiding principle in their respective jobs. They will be deeply missed by all of us, but their legacy will continue."