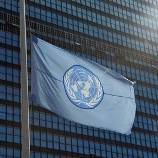 08 May 2011 - UNODC Executive Director Yury Fedotov has expressed his deep sorrow at the loss of four UNODC colleagues and two Bolivian Air Force personnel killed in a plane crash in the Plurinational State of Bolivia. The sad news was confirmed by official Bolivian sources on Saturday 7 May following routine narcotic crop monitoring work that was being carried out in that country.

"Our thoughts go out to the families and colleagues of both the United Nations staff and Bolivian military pilots who were lost in this tragic crash. Those United Nations staff who perished were carrying out some of the most important work for our Office, which depends on their essential monitoring work to help in the preparation of national Bolivian crop monitoring reports and UNODC's most important publication, the World Drug Report", said Mr Fedotov. "I would like to express my sincere condolences to all those affected by this unfortunate news. It is a tragic blow to our Office and to the Bolivian nation."

In its work, UNODC routinely monitors the production of narcotic crops in several parts of the world, from Asia to South America. Despite the fact that the majority of the monitoring is carried out by satellite, routine flights such as that which ended so tragically are often necessary to confirm the accuracy of some parts of the satellite images received.

It was during one of those monitoring flights that the plane went missing on Thursday 5 May. Despite claims that the plane had subsequently been seen and inaccurate reports over the weekend, its wreckage was found on Saturday 7 May in an isolated area of Bolivia.

Mr Fedotov said: "It is the work of dedicated United Nations staff members such as Iván, Patricia, Mariela and Stephan that makes the Organization what it is today and it is so very unfortunate that they have had to give their lives to carry out such important work."

The following statement was also issued by the Spokesperson for the Secretary-General:

The Secretary-General said today that he was deeply saddened to learn that four staff members of the United Nations Office on Drugs and Crime (UNODC), along with two air force pilots, were killed in a plane crash in Bolivia while monitoring narcotic crops.

He sends his sincere condolences to the families, friends and colleagues of the UNODC staff and the Bolivian military pilots.

Their dedication to the fight against narcotic drugs will be a lasting legacy and is an inspiration to us all, the Secretary-General said.