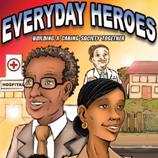 03 November 2011 - In many countries across the globe, individual and community security is threatened by high rates of violent crime. South Africa is no exception. Countless victims of rape, sexual assault, domestic abuse and other forms of violent crime are often left traumatized and with long-term physical and psychological injuries. While preventative action is critical, post-incident responses are equally important, since support for victims of crime not only helps to tackle insecurity but also contributes to the prevention of further violence.

Regrettably, in many instances, victims do not receive the assistance, support and protection they need. Moreover, redress is often lacking.

For the past few years, UNODC has been working with the Government of South Africa to change that situation and to implement the country's Victim Empowerment Programme. Funded by the European Union and implemented in collaboration with the Department of Social Development, the Programme supports victims of violent crime in a number of areas. One of the most recent components of the Programme is the development of "one-stop centres": places of safety which offer a range of integrated services to victims of violent crime, such as legal assistance, medical care, psychosocial support and shelter services.

In October, the first one-stop centre - named the "Khuseleka One-Stop Centre", "Khuseleka" being derived from the Zulu word for protection - was opened under the auspices of the Programme in the country's northernmost province, Limpopo. The Khuseleka centre will be open 24 hours a day and brings together a diverse number of Government entities and civil society organization services previously operating in separate locations. It currently has the capacity to house up to 30 adults and 12 children for up to six months. There are plans to open multiple one-stop centres across South Africa.

At the opening of the Khuseleka One-Stop Centre, UNODC Regional Representative for Southern Africa Mandiaye Niang highlighted the importance of promoting a victim-centred approach to crime: "Crime takes an enormous toll on victims. However, in many criminal justice systems, victims of crime are often forgotten and sometimes even re-victimized by the system itself. This is a situation which we must reverse."

Coinciding with the opening of the Centre, a new victim-focused campaign has also been launched. "Everyday Heroes", a UNODC-supported six-part comic book series on victim empowerment, raises public awareness of a number of key topics relating to victims of crime. Those topics include domestic violence, human trafficking, abuse of persons with disabilities, abuse of older persons, sexual assault and sexual abuse of children. The series is available online at www.everydayheroes.org.za.