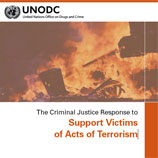 23 November 2011 - A UNODC policy guide released yesterday offers advice on how to reform and improve criminal justice systems so that they are fairer and more sensitive to the needs of victims of terrorism and their families.

"Victims matter. Their rights and needs, as well as those of their families, should be at the heart of any criminal justice response," said UNODC Executive Director Yury Fedotov during the launch of the report at United Nations Headquarters in New York.

The publication, the first of its kind, includes advice for policymakers and criminal justice officials and examples of good practices to support victims of terrorism. Recommended measures include judicial assistance, protection from intimidation and retaliation, material, medical, psychological and social assistance and access to compensation.

"I hope this marks a positive step forward in our joint efforts to create criminal justice systems that are more responsive to the needs of the innocent," said Mr. Fedotov.

Victims have long played a secondary and mostly silent role in criminal trials. It is therefore crucial to grant them equal and effective access to justice to ensure the effective prosecution of perpetrators of crime.

Robert Orr, Chair of the United Nations Counter-Terrorism Implementation Task Force (CTITF), stressed the importance of helping victims find their public voice to shed light on issues that would otherwise not be addressed.

"The CTITF continues to be committed to elaborating on the compendium of best practices on supporting terrorism victims, including media coverage and exploring options for financial and material support for victims."

The United Nations has previously taken measures to emphasize the importance of the human rights of victims, including the adoption, in 2006, of the Global Counter-Terrorism Strategy, which the report aims to expand on.

"The present publication builds upon this mandate and is intended to promote effective criminal justice mechanisms to support victims of acts of terrorism at the national level," said Mr. Fedotov, who reiterated the commitment of UNODC to providing countries with assistance in the areas of law enforcement and legal and legislative guidance.

Award-winning actress and UNODC Goodwill Ambassador Mira Sorvino was also present at the launch and spoke passionately about her experiences of talking to victims of terrorism, stressing the importance of making their voices heard.

"Making victims the central part of any criminal justice response to terrorism is imperative. Not only must they be encouraged to be a major part of bearing witness in the courtrooms but their care and compensation for what they and those close to them have suffered must be of utmost importance to legal systems around the world."

"This handbook is dedicated to the 24 friends and colleagues who died in a car bomb attack on the United Nations offices in Abuja, Nigeria; to those who died in terrorist attacks on United Nations premises in recent years; and to the victims of terrorist acts everywhere," said Mr. Fedotov.