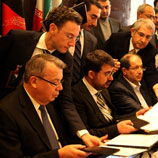 28 November 2011 - UNODC Executive Director Yury Fedotov met with President Hamid Karzai of Afghanistan in Kabul ahead of the International Conference on Afghanistan taking place next week in Bonn. Given the enduring links between insecurity and opium poppy cultivation, Mr. Fedotov said he would welcome recognition at the Bonn conference of the importance of counter-narcotics.

Separately, ministers from Afghanistan, the Islamic Republic of Iran and Pakistan also met in Kabul to discuss enhancing responses to regional security challenges. Amid concerns over the rising production and value of Afghan opium, Mr. Fedotov stated:  "More than ever, we must emphasize shared responsibility in our strategies to counter shared threats."

The parties are meeting in the framework of the UNODC-brokered Triangular Initiative, designed to strengthen drug control among the three countries most seriously affected by Afghan opium. The initiative promotes information exchange and intelligence-led operations targeting the major transnational networks, while building confidence.

More than 90 per cent of the world's opium comes from Afghanistan, with most of it transiting the Islamic Republic of Iran and Pakistan. Drugs pose a threat to the health and security of all three countries, and to many others beyond the region.  "At the International Conference on Afghanistan next week in Bonn, I hope to encourage the international community to bolster counter-narcotics as an essential element in ensuring a better future for Afghanistan and its neighbours," Mr. Fedotov said.

The Executive Director said robust regional cooperation was essential. UNODC is about to launch its regional programme for Afghanistan and neighbouring countries, which will focus on drug control.  He said he would welcome support from Afghanistan's president for the programme's regional approach, including cooperation not only with the Islamic Republic of Iran and Pakistan, but also further afield with countries in Central Asia, as well as the Russian Federation and China.

In parallel, the new country programme of UNODC for Afghanistan (2012-2014) will place emphasis on the provinces, providing alternative livelihoods for opium poppy farmers, expanded health care, drug demand reduction and HIV prevention while enhancing the capacity of the Ministry of Counter-Narcotics to conduct research, surveys and analysis.

Afghanistan, the Islamic Republic of Iran and Pakistan have all been boosting their cross-border counter-narcotics capacities, but national law enforcement authorities alone cannot effectively surmount the challenges posed by the porous Afghan border and the challenging terrain.  The Triangular Initiative has been gaining momentum since its launch in 2007.  Its joint planning cell established in Tehran to enhance analytical and operational capacity and to launch joint operations has notched up successes. Since 2009, 12 drug control operations coordinated by the joint planning cell have resulted in the seizure of several tons of illicit drugs and the arrest of many drug traffickers.

"But much more needs to be done," said Mr. Fedotov. "The joint planning cell must be the engine of the Triangular Initiative. Joint patrols should become routine, not exceptional events".  He encouraged the appointment of permanent liaison officers to the joint planning cell and the conduct of the first joint operation between Afghanistan and Pakistan.  In a positive step forward, the border liaison office at Torkham, on the border between Afghanistan and Pakistan, had become fully functional in February 2011, Mr. Fedotov noted.

Afghanistan's economy is hampered by corruption, which, if it continues, could profit the illicit drug trade and weaken the impact of foreign aid.  Mr. Fedotov recognized that Afghanistan had ratified the United Nations Convention against Corruption. UNODC stood by the High Office of Oversight and Anti-Corruption, the Attorney General's Office and the Ministry of the Interior in the implementation of the Convention, he said.