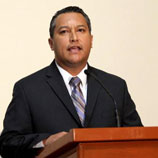 14 November - A helicopter accident tragically claimed the lives of the Minister of the Interior of Mexico, Francisco Blake Mora, Vice-Minister Felipe de Jesus Zamora Castro and six other officials on 11 November.

Paying tribute to Mr. Blake Mora, a key figure in the country's efforts to confront drug cartels, Mr. Yury Fedotov, Executive Director of UNODC, lauded the Minister's contribution to curbing serious threats in the region and beyond.  "I recently met the Minister. He was a man of vision, dedication and leadership. With his passing, our Office has lost one of its staunchest allies. I offer my sincerest condolences to the Government and people of Mexico, and to the families of the deceased."

"The support of Mr. Blake Mora has helped us to set in motion a number of important initiatives. Thanks in large part to the extraordinary commitment of Mr. Zamora Castro, Mexico became the first country in the world to adopt the UNODC-led Blue Heart Campaign against Human Trafficking. We will redouble our efforts to strengthen the work we have begun in Mexico," Mr. Fedotov said.

Mexico has implemented numerous reforms to promote security and the rule of law, while bolstering support for victims of organized crime. UNODC has been offering the Government technical assistance to counter transnational organized crime - including the trafficking in drugs and firearms, the smuggling of migrants, fraud, corruption, money-laundering, kidnapping and extortion - and to enhance the protection of journalists.