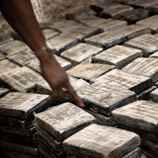 Trafficking is a major threat to the development of Guinea-Bissau and has led to a sharp increase in illicit drug use in that country. In 2009, an estimated 13 tons of the cocaine trafficked via West Africa were consumed or stored in the region, giving rise to serious concerns over drug-related health. The gross profits derived from the wholesale and retail sale of cocaine in the region are devastating. An estimated $800 million was spent on illicit drugs in West Africa in 2009 alone. In the same year, the gross national income of Guinea-Bissau was $400 million.

In order to tackle illicit drugs and organized crime, UNODC has been working with Guinea-Bissau and regional authorities in several key areas.

Since 2008, the Office has been helping to set up a specialized division, the Transnational Crime Unit, within the Guinea-Bissau Judicial Police, to increase the number of investigations of drug trafficking and organized crime. Earlier this year, that work was expanded to include the establishment of branches of the Judicial Police in two key remote locations of Guinea-Bissau: the island of Bubaque in the Bijagós archipelago and Catió in the south of Guinea-Bissau. UNODC has also been working to strengthen the justice system and rule of law structures in Guinea-Bissau, notably by training judges and prosecutors specializing in cases related to drug trafficking and organized crime, and to support the establishment of a central authority for international judicial cooperation and mutual legal assistance in criminal matters.

Founded in December 2010, the Transnational Crime Unit is in the process of becoming fully operational and will work in collaboration with similar units in Liberia and Sierra Leone. Mr. Fedotov encouraged authorities to continue their efforts and called on the international community to recognize the value of transnational crime units in disbanding organized crime groups and their operations, noting that "Organized crime is just that - organized. We can only respond to this by ensuring that our own efforts are also structured, well planned and cohesive."