Integrated and sustained efforts are key in ending human trafficking 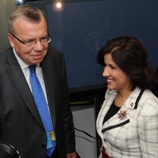 23 September 2011 - Speaking at two separate yet related events this week on the issue of human trafficking, UNODC Executive Director Yury Fedotov reiterated the need for sustained efforts in fighting this crime at all levels: "It is only through working together from the community-level right through to the international arena that we can break this crime and put an end to human trafficking."

The Executive Director's comments follow the launch of a new human trafficking portal - Freedom Without Borders - and an address made to an event entitled "Innovative Collaborations to Combat Trafficking" co-organized by the US, Brazilian and Dutch Missions to New York.

As a multi-billion dollar crime and one which enslaves an estimated 2.4 million people at any given time - many of whom are children - each and every action against trafficking is critical.

Freedom Without Borders has been established by the First Lady of the Dominican Republic, H.E. Dr. Margarita Cedeño de Fernández, who is a member of the United Nations Global Initiative to Fight Human Trafficking (UN.GIFT) Women Leaders' Council. The website acts as a database and focal point for useful information within the area of human trafficking covering aspects from official documents and activities to educational materials and assistance tools. "With females disproportionately affected by human trafficking, it is encouraging to see the actions of the Women Leaders' Council and those of Dr. Cedeño de Fernández which demonstrates the vital role of women in the fight against this crime" said the Executive Director.

Attending the discussion on "Innovative Collaborations to Combat Trafficking", Mr. Fedotov noted that if human trafficking is to be eradicated, collaboration and partnership must not be a destination, but a point of departure. As the guardian of the United Nations Protocol on Trafficking in Persons, UNODC supports strong partnerships that reach across borders and in this acts as a bridge between Inter-Governmental and Non Governmental Organizations, between the public and private sectors, and between those who are aware of human trafficking and those who should be concerned.

Carrying on the theme of knowledge dissemination which was the topic of the Freedom Without Borders launch, the Executive Director highlighted the work of two key UNODC supported initiatives - the UN Voluntary Trust Fund for Victims of Human Trafficking and the UN.GIFT.HUB. The latter is an example of effective cooperation and partnership within the UN, while the former takes an innovative and collaborative approach in its fundraising. Through donations from Governments, the private sector and people from all walks of life, the Trust Fund works to provide humanitarian, legal and financial aid to victims of human trafficking.