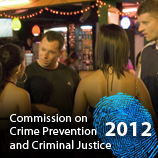 "Today, our two organizations are conveying a strong message to the world that we will not be party to activities that exploit women and children," said Mr. Fedotov at an event taking place this week during the twenty-first Commission on Crime Prevention and Criminal Justice.

Mr. Rifai said: "We are here to reiterate the tourism sector's commitment to combating human trafficking, an unacceptable affront to human rights and dignity, and to set out clear steps for stronger cooperation in fighting one of the most dreadful crimes of our time."

Yesterday, UNODC and UNWTO signed a memorandum of understanding to step up cooperation against this form of exploitation.  They will work together in areas of mutual interest, including the unlawful acquisition of cultural artefacts, the enhancement of private sector anti-corruption policies and, crucially, the prevention of human trafficking within the tourism sector.

A staggering 1 billion tourists, or one in seven of the world's population, will travel abroad in 2012 - and the tourism sector is expanding. While this expansion drives economic growth, job creation and development, there is evidence that tourism infrastructure is also being used for the exploitation of and trafficking in persons - and children are especially vulnerable.

Victims of trafficking are most often enslaved for sexual purposes, but they might also be found in kitchens or cleaning guesthouses, restaurants and bars. Tourism infrastructure can, in turn, create markets for forced and exploitative begging and street hawking. Even organs from victims of trafficking are used to attract people who need a transplant.

The tourism sector can and should play a vital role in preventing human trafficking linked to tourism, including sexual exploitation, said Mr. Fedotov. Codes of conduct for tourism companies have been developed - based on the UNWTO Global Code of Ethics for Tourism approved by the General Assembly in 2001 - and laws have been enacted that allow for the prosecution in their homeland of tourists who engage in sexual conduct with children. These efforts need to be strengthened and built upon, he added.

In India, for example, the Ministry of Tourism, UNODC, the private sector and Save the Children have jointly developed and adopted a national Code of Conduct for Safe and Honourable Tourism, based on the Global Code. Hoteliers and tour operators have pledged to abide by the Code to make sure that no one involved in the hospitality industry is forced to use drugs or is sexually exploited. The model is ready to be replicated in other countries.

Hotel companies are carrying out awareness-raising campaigns and providing vocational training for trafficked persons. Marriott International, for instance, has taken a comprehensive approach to such human rights abuses through policy commitments and staff training. Marriot runs community outreach programmes which helps vulnerable young people, including rehabilitated victims of human trafficking, providing them with new life opportunities and training at their hotels.