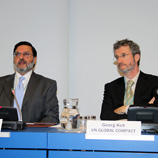 The forum examined new types of transformational partnerships for development and shared best practices that would contribute to the achievement of internationally agreed development goals, including the Millennium Development Goals (MDGs).

Among the issues discussed were opportunities for and the challenges of building partnerships with small and medium-sized enterprises and social enterprises; innovative partnerships for sustainable development; United Nations brand management; enhancing collaboration at country level; and private-sector investment in support of food security and poverty reduction.

The meeting follows the adoption, in 2011, of a United Nations General Assembly resolution that recognizes the crucial role of the private sector in meeting the Millennium Development Goals. This strong governmental support reinforces the mandate of the United Nations to engage in public-private sector partnerships to advance humanitarian and development objectives. In addition, Secretary-General Ban Ki-moon has made working with the private sector one of the key priorities of his second term in office.

UNODC has been working to promote private-sector partnership in order to combat transnational organized crime and corruption.

In January, Backes and Strauss, the London-based watchmakers, decided to support UNODC in raising funds for victims of human trafficking by launching an exclusive line of "Victoria Blue Heart" watches. A portion of the proceeds from sales will go towards the Voluntary Trust Fund for Victims of Human Trafficking.

In October 2011, the UNODC Blue Heart Campaign against Human Trafficking entered into a joint venture with luxury fashion label Beulah London, a socially conscious brand which, through the manufacture of its fashion items, works with women who have escaped the sex trade in India. Proceeds from the sales profits also go to the Voluntary Trust Fund.

UNODC is also a beneficiary of $3.05 million in financing for anti-corruption projects from the Siemens Integrity Initiative, part of the World Bank-Siemens AG comprehensive settlement in accordance with which Siemens has undertaken to support global efforts to fight corruption and fraud.

In April 2011, at the request of the Commission on Crime Prevention and Criminal Justice, UNODC organized a symposium bringing together government officials and private-sector experts from banking and financial institutions, international shipping companies and organizations working to tackle wildlife and forest crime and cybercrime. Participants in the symposium discussed public-private partnerships as a mechanism for combating transnational crime, shared best practices and mapped possible future joint initiatives.

The United Nations-private sector meeting, which brought together more than 100 participants, was hosted by UNODC and the United Nations Industrial Development Organization.