International Migrants Day: Working to tackle organized crime and the exploitation of migrants 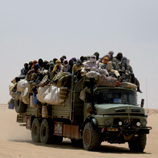 18 December 2012 - Twenty-two years ago today, the United Nations General Assembly adopted the International Convention on the Protection of the Rights of All Migrant Workers and Members of Their Families - an important event both for people who move voluntarily for better economic opportunities and different lifestyles as well as those displaced by conflict, political upheaval, violence, disasters, climate change and, increasingly, economic necessity. In recognition of this, 18 December was designated International Migrants Day - a day on which UNODC takes the opportunity to highlight the role of organized criminal networks that benefit from migrants seeking a better life.

According to the World Disasters Report 2012 published by the International Federation of the Red Cross and Red Crescent Societies (IFRC), there are an more than 70 million people classified as forced migrants across the globe. Of these, the United Nations Development Programme says that there are some 50 million irregular migrants believed to have used the services of smugglers at some stage of their journey.

The term 'smuggling of migrants' refers to the facilitation of illegal border crossings or of illegal residence in a country with the aim of making a financial or other material profit. Migrants are often smuggled by organized criminal networks that exploit the lack of legal migration opportunities available to migrants seeking a better life. As legal immigration channels become more limited, an increasing number of people seek the assistance of smugglers, who take increasingly risky measures to circumvent border controls - often at the cost of migrants' rights. Since the smuggling of migrants is a highly profitable illicit activity with a relatively low risk of detection, it has proven attractive to criminals.

UNODC also helps States to enact laws criminalizing involvement in the smuggling of migrants, trains law enforcement officers and prosecutors from around the world in how to deal with smuggling cases, and facilitates information sharing on the crime. One example of this is in South-East Asia where the pilot Voluntary Reporting System on Migrant Smuggling and Related Conduct helps states develop a sound knowledge base through the sharing of data which then allows the building of effective policies and counter-measures in response to migrant smuggling. This internet-based, secure system facilitates the collection, sharing, and analysis of data on migrant smuggling, irregular migration and other related conduct in a variety of areas, including quantitative size of flows; major routes used; fees paid; means of transport and methods used; profiles of irregular and smuggled migrants; and profiles of migrant smugglers.

UNODC has chaired the Global Migration Group, a United Nations inter-agency group bringing together heads of agencies to promote the wider application of all relevant international and regional instruments and standards relating to migration and to encourage the adoption of more coherent, comprehensive and better coordinated approaches to the issue of international migration.

As a form of transnational organized crime, the smuggling of migrants is the subject of a campaign launched by UNODC in mid-2012. Information on the awareness campaign can be found at www.unodc.org/toc and includes a video, which is also available from www.youtube.com/unodc. The campaign page also includes a dedicated section and fact sheet on the smuggling of migrants, which is available from www.unodc.org/toc/en/crimes/migrant-smuggling.html.

United Nations Convention against Transnational Organized Crime and its Protocol against the Smuggling of Migrants by Land, Sea and Air