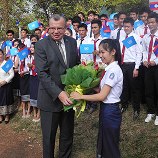 6 December 2012 - Lao PDR's position at the hub of the Greater Mekong Subregion and its shared borders with Cambodia, China, Myanmar, Thailand and Viet Nam make it "extremely vulnerable" to the trafficking of people, illicit drugs and commodities by transnational organized crime groups, warned Yury Fedotov, UNODC Executive Director. He said this was true despite the country's economic reforms, impressive economic growth rates and its efforts to combat corruption.

"While economic growth and regional integration bring many positives such as the increased mobility of goods, services, people and money, they also provide opportunities for transnational organized crime to expand, threaten human security and challenge the rule of law," said Mr. Fedotov.

"Transnational organized criminal syndicates traffic in illicit drugs, children, women and men, counterfeit products and fake medicines. But they also play a role in illicit resource extraction including protected natural resources, timber, fish and other wildlife. These syndicates represent a threat to public health and to society's well-being," said Mr. Fedotov. "Let's put them out of business!"

During a visit to the UNODC-supported Counseling and Protection Centre for Women and Children, Mr. Fedotov cited it as a best practice: "We need more such shelters at a time when many of those in society are being victimized in this way".

Mr. Fedotov noted that the centre currently housed both women and children who had been victimized by human trafficking - as well as domestic violence and sexual exploitation. He commended police and prosecutors for focusing on victims and their human rights in their response to such crimes against children and women.

Mr. Fedotov also urged support for Project Childhood, an initiative to combat the sexual exploitation of children - mainly in the travel and tourism sectors - within the Greater Mekong subregion. The project is currently active in Lao PDR, Cambodia, Thailand and Viet Nam. Project Childhood is being implemented in two complementary pillars - the Protection Pillar, a partnership between UNODC and Interpol, and its sister arm, the Prevention Pillar, implemented by World Vision.

In other meetings, Mr. Fedotov congratulated the Government for significant seizures of illicit drugs in the last few years, and strongly emphasized the need for an effective community-based approach to drug use and HIV prevention. Such an approach should be evidence-based and supportive of human rights.