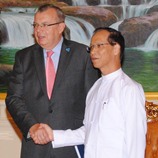 "Opium and amphetamine-type-stimulants are problems in Myanmar, and they are also considerable challenges to neighbouring countries.  I welcome the Government's request to UNODC to do all we can to support Myanmar and other regional partners to reach their ambitious but attainable drug control goals," Mr. Fedotov said.  "We will respond to this call."

Aside from illicit drugs, the Vice-President and Mr. Fedotov discussed the impact of corruption on the country's reform processes.  The UNODC chief pledged his organization's technical support to Myanmar as it undertakes the process of ratifying the UN Convention against Corruption (UNCAC).  He emphasized the importance of fast-tracking ratification the UNCAC, while offering UNODC's assistance in aligning the country's laws with the Convention.

"The UN Convention against Corruption offers a blueprint for dealing with corruption and I would encourage the Myanmar Government to ratify it as soon as possible. We all have great hopes for the reforms. The incorporation of the comprehensive measures that the Convention calls for will safeguard and buttress those reforms at a time when foreign investment is being encouraged," said Mr. Fedotov.  "Having the Convention and related laws in place will minimize the threat posed by corruption."

In addition to support for anti-corruption activities, Mr. Fedotov highlighted the importance of wider rule of law reform measures and indicated UNODC's willingness to work with the Government in the areas of anti-money laundering and police reform.

Mr. Fedotov was speaking in Myanmar during a 12-day mission to Southeast Asia.  While in the region, Mr. Fedotov will meet heads of state, and discuss the issues of illicit drugs, corruption, and organized crime with local experts, NGO partners and his teams implementing UNODC's regional and country programmes.