Coffee instead of coca: Peruvian farmers reap fruits of their labour 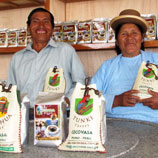 14 February 2012 - Wilson Sucaticona is proud of his achievements. Last year, his coffee earned first prize in the National Coffee Quality Competition in Lima for the fourth time.

"I have worked in the coffee fields with my father since I was twelve years old. When I turned 18, my father gave me a one-hectare field so I could start planting my own coffee," he recalls. At the same time, adds Wilson, his family cultivated coca because income from coffee was too low to sustain them.

In Peru's former coca-growing areas, drug traffickers were highly influential in the 1980s and 1990s. The local population had no other means of earning a living except by growing coca, the raw material used in the manufacture of cocaine. Consequently, farmers were highly vulnerable to organized criminal groups who bought those illicit crops and promised wealth to those who cultivated them.

Through a UNODC alternative development project, farmers have received training on how to cultivate high-quality coffee in a sustainable and environmentally-friendly way, avoiding the use of chemicals. Farmers have realized that they can pursue income-generating activities that are legal and sustainable, and that those alternatives mean independence and security for themselves and their families. They have gladly abandoned coca farming and concentrated on cultivating coffee, using the new techniques and benefiting from enhanced market access and fair trade conditions.

As a result of the hard work, cooperatives have become successful coffee producers and have obtained recognition certificates by coffee organizations, such as the organic coffee certificate and the fair trade certificate. Cooperatives have turned into enterprises that are owned by the farmers, who become shareholders and can negotiate directly with buyers from all over the world.

Wilson has been a member of one such farmers' cooperative, Central de Cooperativas Agrarias Cafetaleras (CECOVASA), since its foundation in 1970. CECOVASA has a total of 4,864 members; it also runs an organic coffee programme of which Wilson is a partner. During the twenty-second Specialty Coffee Association of America Fair last year, CECOVASA coffee won "World's Best Coffee" title.

"I do not have to hide any more," he says, "I am proud of what I produce. I pay taxes and I can now provide my whole family with health insurance. Before, I had to hide from the police and I did not feel proud at all, I felt ashamed, because I knew I was doing something illegal."

Wilson explains that after he started earning from coffee farming activities, he and his wife were able to purchase new fields. They have two sons and two daughters and now own four hectares of coffee fields. "When my children turn eighteen, each one will have a hectare of his own", he adds with a smile.

A new challenge for Wilson this year is becoming independent from the cooperative in order for him to market his own product: "My coffee was called Tunki, but it was sold along with other products. Now it is called Tunkimayo," he says.

At Stand 162 at the Great Mistura Market, away from the crowd that surrounds the CECOVASA stand, he tries to be recognized. There are more battles that Wilson must confront, but for now, he has already won the battle against drug trafficking in his own small way.

It is, however, too soon to celebrate. Despite the success of farmer-led cooperative enterprises, coca production in Peru slightly increased by 2.2 per cent from 59,900 hectares to 61,200 hectares from 2009 to 2010, according to UNODC. This indicates that there are still many farmers in need of alternative development assistance.

Continued support by the international development community is needed in Peru and other countries in the region, where local farmers remain vulnerable to illicit crop cultivation and related insecurity and fear.