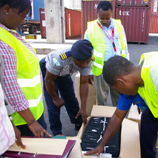 22 February 2012 - UNODC head Yury Fedotov has underlined the importance of robust development and effective rule of law in reducing West Africa's vulnerability to drug trafficking and organized crime. Briefing the Security Council in New York yesterday, Mr. Fedotov stressed the need for concerted and coordinated action in the face of rapidly evolving transnational threats.  "UNODC's approach has been strategic and tactical. It represents a multidimensional effort in acknowledgement of the multifaceted nature of the challenges," he said.

In recent years, West Africa has emerged as a hub for cocaine trafficking between Latin America and Europe. Approximately $900 million are generated from cocaine trafficked from West and Central Africa to Europe. Taking advantage of porous borders and fragile State and security institutions, traffickers easily outgun their opponents.

The number of cocaine seizures has been dropping sharply in West Africa. Some 21 tons of cocaine were smuggled to Europe in 2009, down from 47 tons two years before. However, there was no discernible dent in the overall cocaine supply to Europe, suggesting that traffickers are evading detection more skilfully.

Piracy, a relatively new phenomenon in the Gulf of Guinea, is dwarfed by the scale of the problem around the Arabian Peninsula. But rising numbers of attacks off the coast of West Africa - 28 in 2011 compared with 11 in 2010 - suggest that pirates may have found a soft target. With abundant natural resources up for grabs, the Gulf of Guinea - a stretch of coast taking in more than a dozen countries - is witnessing disruptions in shipping and much-needed investment.

Highlighting the need for broad-based collaboration, Mr. Fedotov said: "Our approach recognizes that while the problems in West Africa are local in nature, the solutions are often global." Strong regional frameworks could pave the way for mutually reinforcing interregional strategies, he added. A network of prosecutors could be established in West Africa, similar to the one already operating in Central America. Cooperation of that nature is particularly important given the threat of transatlantic trafficking, he added.

The United Nations has been spearheading efforts to strengthen crime information networks among countries of origin, transit and destination, improve communications and intelligence-gathering among West African airports and crack down on the use of sea containers for trafficking.

In 2008, a ministerial conference of the Economic Community of West African States (ECOWAS) adopted a regional plan to combat drug trafficking and organized crime in West Africa (for the period 2008-2011). UNODC, through its West Africa Coast Initiative, is working closely with the United Nations Office for West Africa, the Department of Political Affairs, the Department of Peacekeeping Operations and INTERPOL to support implementation of the ECOWAS regional action plan. Hailing the plan as "one of the best means of uniting local and international response", Mr. Fedotov voiced support for its renewal beyond 2011.

The West Africa Coast Initiative has been building national and regional capacities in the areas of law enforcement, forensics, intelligence, border management, money-laundering and the strengthening of criminal justice systems. A key element of the initiative has been the establishment of specialized transnational crime units in Côte d'Ivoire, Liberia, Guinea Bissau and Sierra Leone, with seizures already being reported. Between January and August 2011, the unit in Sierra Leone made 25 convictions and seized more than 1,800 kilograms of cannabis herb. Guinea has been invited to join the initiative.

Mr. Fedotov called for greater political commitment and international assistance to West Africa and sub-Saharan Africa. "Additional resources are needed if we are to sustain reforms in the long term and contribute to security sector reform" he said.