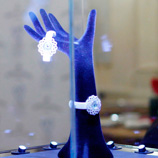 18 January 2012 - Backes and Strauss, the London-based watchmakers, have decided to support UNODC in raising funds for victims of human trafficking by launching an exclusive line of "Victoria Blue Heart watches". The watches were launched yesterday at a special event at the Hotel des Bergues, Geneva. A portion of the proceeds from sales will go towards the Voluntary Trust Fund for Victims of Human Trafficking created in 2010 by the United Nations General Assembly. The Blue Heart is the international symbol of solidarity with victims of human trafficking.

Speaking at the event, UNODC Executive Director Yury Fedotov thanked Mr. Vartkess Knadjian, Chief Executive Officer of Backes and Strauss, for the initiative, which is an example of private sector support for the work of the United Nations. But the clock was ticking, he said. 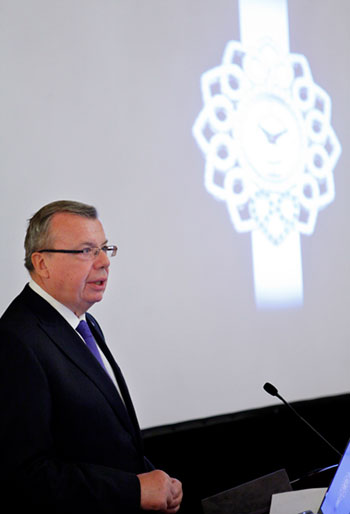 "Criminal proceeds from human trafficking amount to some $60,000 a minute. By comparison, the Voluntary Trust Fund is supported by an average of around 80 cents a minute, based on money received," said Mr Fedotov. "The disparity is glaring and it has severe implications for our response to human trafficking", he added.

Human trafficking is a gross violation of human rights and can take many guises: women, children and men find themselves enslaved in forced labour or domestic servitude or subjected to sexual exploitation, while child victims are also used as child soldiers. No country is immune, whether as a country of origin, transit or destination.

One of the most lucrative forms of organized crime, human trafficking generates $32 billion annually, rivalling the profits reaped by the illicit trade in arms and drugs. According to UNODC data, women comprise two thirds of trafficking victims. At any given time, an estimated 2.4 million people are trapped in modern-day slavery.

Victims, especially women and children, often need physical and psychological rehabilitation, assistance in reintegrating into society and other forms of support. The Voluntary Trust Fund, managed by UNODC, was launched in 2010 by Secretary-General Ban Ki-moon, and through its Small Grants Facility supports the provision of humanitarian, legal and financial aid to victims of trafficking. In October 2011, the Small Grants Facility awarded funding to 12 front-line organizations working with survivors of human trafficking around the world.

The UNODC Blue Heart Campaign raises awareness of human trafficking as a shameful crime that exploits millions around the world, and is aimed at preventing more people from becoming victims.