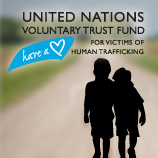 4 July 2012 - The thriving cross-border trade in Poipet, a Cambodian town on the Cambodia - Thailand border, attracts many migrant families from other parts of Cambodia. However, the lack of actual job opportunities has led to high unemployment rates and widespread poverty, with most residents earning one dollar a day or less.

Due to the hardships, child labour is widespread, not only in Poipet, but also through child trafficking and unsafe migration where children from Cambodia are taken across borders to work as beggars and street sellers in Bangkok. Children from Poipet can reportedly generate between 300 and 1000 Baht a day begging on the streets of Bangkok, much more than the adult wages in Poipet.

One such child, Tomi, is an 8 year old boy who was born in the Battambang province of Cambodia and lived with his grandmother until his mother and stepfather, who lived in Thailand, decided to take him to Thailand to earn money.

In Thailand, Tomi was forced to sell flowers and beg in the streets of Bangkok. On good days, he could earn 800 to 1000 Bath (around US$ 25-35). Tomi often hid from the Thai police by crawling into garbage drums. One day he was picked up by the police who sent him to one of the Government's welfare centres, from where he was repatriated to Cambodia.

Tomi arrived at the government- run Poipet Transit Centre and from there was referred to the Damnok Toek Reception Centre in January 2011. Damnok Toek is a Cambodian NGO that started its work in 1997 in Cambodia to assist vulnerable children and their families. It is one of the beneficiaries of the UN Trust Fund for Victims of Human Trafficking which through its Small Grants Facility decided to fund the NGO's Reception Centre starting October 2011; to help ensure a sustainable reintegration of the children into their families and to prepare them for an independent life.

During his stay at the Centre, Tomi was enrolled into classes where he learnt how to read and write. He was also taught proper hygiene and learnt about labour exploitation and human trafficking.

In the meantime, social workers were able to trace and assess his family. Tomi was eventually returned to his grandmother once it was deemed safe do so. Damnok Toek supported the grandmother with a small grant to start a grocery shop. Tomi has gone back to school and he hopes to become a teacher at his local school when he grows up.

Since November 2011, 52 children have been catered for at the centre, receiving non-formal education, counseling, life skills and participating in recreational activities such as art, music, computer lessons and learning English. Upon family tracing and assessment, three more children have been reintegrated into their families and will be monitored for one year.

The United Nations Voluntary Trust Fund, managed by UNODC, was officially launched in 2010 by Secretary-General Ban Ki-moon, and through its Small Grants Facility supports the provision of on-the-ground humanitarian, legal and financial aid to victims of trafficking. In October 2011, the Small Grants Facility awarded funding to 11 front-line organizations working with survivors of human trafficking around the world.