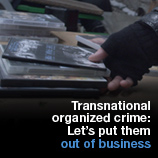 26 July 2012 - Counterfeiting is estimated by the Organisation for Economic Co-operation and Development (OECD) to generate some $250 billion a year in criminal proceeds. As a form of transnational organized crime, counterfeiting forms part of a new campaign by the UN Office on Drugs and Crime (UNODC).

The campaign, which aims to bring attention to the various aspects of organized crime, can be seen on www.unodc.org/toc and includes a new awareness-raising video which is being rolled out online ( www.youtube.com/unodc) as well as through international broadcasters. This illustrates the key financial and social costs behind organized crime and reveals the dangers of counterfeit goods to health and safety. The campaign page also includes a dedicated section and Fact Sheet on counterfeit products ( http://www.unodc.org/toc/en/crimes/counterfeit-goods.html).

The production and sale of counterfeit goods is a global, multi-billion dollar problem and one that has serious economic and health ramifications for Governments, businesses and consumers. Counterfeiting is everywhere - it can affect what we eat, what we watch, what medicines we take and what we wear - and all too often the link between fake goods and transnational organized crime is overlooked or underestimated.

Counterfeiting is a wide ranging crime which typically includes the practice of manufacturing goods, often of inferior quality, and selling them under a brand name without the owner's authorization. Counterfeiters are involved in the illegal production of knock-offs in virtually every area - food, drinks, clothes, shoes, pharmaceuticals, electronics, auto parts, toys, currency, tickets for transport systems and concerts, alcohol, cigarettes, toiletries, building materials and much, much more. Criminals rely on the continued high demand for cheap goods coupled with low production and distribution costs.

Depending on the nature of the counterfeit goods, there can be serious health and safety concerns for consumers. Counterfeit baby formula and other foods can even be fatal, while purchases such as sub-standard toys, car parts and electrical goods present significant safety risks given their lower quality.

One of the most harmful forms of counterfeit goods is fraudulent medicines. According to the World Health Organization, in parts of Asia, Africa and Latin America, fraudulent pharmaceuticals amount to as much as 30 per cent of the market. These types of medicines are found either to contain the wrong dose of active ingredients, or none at all, or to have a completely different ingredient included. These medicines make some of the world's most dangerous diseases such as malaria stronger by contributing to the development of drug-resistant strains, as the active ingredients are no longer able to work correctly.

With the counterfeit business spread across numerous countries and organized by criminal networks, there is an ever-growing need for action at both the local and international levels. The United Nations Convention against Transnational Organized Crime, of which UNODC is the guardian, is the world's most inclusive platform for cooperation in tackling all forms of organised crime. Currently, 167 countries are party to the Convention and have committed themselves to fighting organized crime through collaboration and ensuring that domestic laws are suitably structured. In October 2012 UNODC will be hosting the Conference of the Parties to the United Nations Convention against Transnational Organized Crime. This biennial series of meetings brings together Governments from across the world to promote and review the implementation of the Convention in order to ensure better approaches to tackling transnational organised crime.

Through its technical assistance programmes, UNODC also works to counter the flow of illicit goods such as counterfeit products and drugs. UNODC and the World Customs Organization launched the Container Control Programme (CCP) in 2006. The programme has achieved remarkable results, seizing 487 containers of fraudulent and contraband goods alongside a further 195 containers of drugs. This year alone, the programme has led to the seizure of 19 containers with over 100 tons of fake Tramadol, a pain-killer, all originating in India and seized in West Africa. The CCP presently has 28 operational port control units across 14 countries and is receiving increased interest from the private sector as the counterfeit seizures grow.

But fighting counterfeiting is not just the role of international organizations, public health authorities, trade organizations or consumer groups. Concerned citizens have a role to play too. In this, UNODC advocates for the following actions: If you know a film has been illegally copied and is being sold as a knock-off, do not buy it. If your favourite designer brand is clearly not made by your favourite designer, stay away. Beyond these obvious counterfeit products, stay alert to other warning signs. If a medicine that you know normally requires a prescription is available online without any sort of script from a doctor, then it could harm your health, perhaps irreversibly. Remember - while these purchases may save you money in the short term, the longer-term losses are far more costly.